But which club will get the chance to wow their members in 2011?

It made an immediate impact on the industry at a time when it needed it most, now the Golfer Pacific $100,000 Giveaway Promotion is set to boost the coffers of another lucky Australian golf club in 2011. 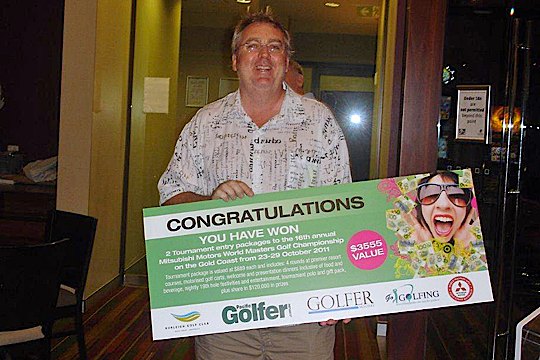 Introduced two years ago to help generate much needed revenue for Aussie clubs, the Golfer Pacific $100,000 Giveaway Promotion has literally teed up thousands of dollars of revenue for its successful clubs.

The $100,000 Giveaway is a sales promotion paid for by Golfer Pacific with the express purpose of driving rounds of golf at the winning club, along with sales in food and beverage and any other sales initiatives the club implements.

It gives the chosen club the chance to hold its own draw, where there is a 1/250 chance of one lucky member winning $100,000. How club members are entered in the draw is entirely up to the winning club.

Burleigh Golf Club won the right to hold the 2010 promotion by simply being one of 1000 clubs that renewed their annual subscription to Golfer Pacific. As a result, $100,000 cold, hard cash was on offer to one lucky Burleigh customer simply by attending the club’s regular Friday night jackpot draw.

Burleigh chose to use the mega cash incentive to attract more people to their Friday night raffles, where 10 free tickets into the $100,000 Giveaway draw were up for grabs each week.

Andrew McKerr was the lucky Burleigh member who won the chance to handpick an envelope containing the $100,000 and while he missed out on the cash booty, he still walked away with an exceptional runner-up prize of a $3,500 entry for two at the 2011 Mitsubishi World Masters golf championship on the Gold Coast.

Burleigh Golf Club general manager Mark Holland said the $100,000 Giveaway Promotion was a big hit in more ways than one.

“We definitely saw an increase in numbers on Friday nights – our raffle tickets were selling fast,” Holland said.

“The $100,000 cash incentive created a real buzz around the club – members were talking about it and looking for ways to get their name in the barrel.”

“And having a great runner-up prize like tickets to the Mitsubishi World Masters generated further interest.”

“It’s a great promotion and one we were very happy to win. We are very grateful and truly thank Golfer Pacific for giving us the opportunity to hold it for our members.”

So if your club subscribes to Golfer Pacific then you could be stepping up to win $100,000 in 2011, which is tipped to be our biggest year yet with even more great prizes and increased promotional opportunities for the winner.