Golf Channel analyst Brandel Chamblee has taken to Twitter to apologise to Tiger Woods for recent comments in a magazine column where in an assessment of the PGA Tour Player of the Year’s season, he suggested he had been “how shall we say this…a little cavalier with the rules”.

Chamblee referred to a number of rules infractions that involved Woods in 2013, including taking an incorrect drop in Abu Dhabi in January, receiving a two-shot penalty at The Masters for another illegal drop, taking a questionable drop during the final round of The Players Championship and receiving a two-shot penalty for causing his ball to move infinitesimally as he addressed it under trees during the BMW Championship. 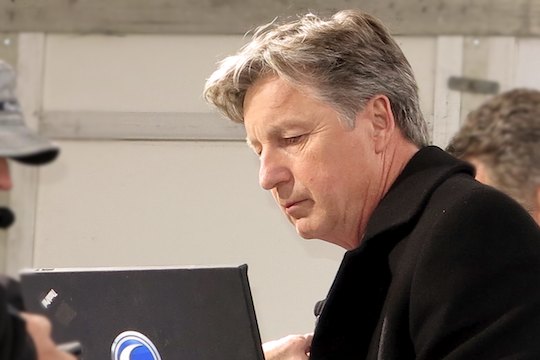 In the article, Chamblee compares the incidents to his own infraction during an exam in school and the inference is clear, he considered Woods had ‘cheated’ to give himself an advantage.

Chamblee wrote in his article of Woods “When I was in the fourth grade, I cheated on a math test and when I got the paper back, it had “100″ written at the top and just below the grade, was this quote, “Oh, what a tangled web we weave when first we practice to deceive!”

“It was an oft-quoted line from the epic poem “Marmion” by Sir Walter Scott, and my teacher’s message was clear.”

“Written once more beneath that quote was my grade of “100″, but this time with a line drawn through it and beneath that an F.”

Chamblee completed his remarks by also grading Woods ‘100’ but with a line through it and an ‘F’ rating below. In comparison, he rated Phil Mickelson, Jason Dufner, Jordan Spieth and Henrik Stenson as having A+ seasons.

As the threat of legal action hung thick in the air, Chamblee has taken to Twitter to ‘publically’ apologise to Woods for what is the most damning slight of a golfer’s character – being labelled a cheat.

“Golf is a gentleman’s game and I’m not proud of this debate. I want to apologize to Tiger for this incited discourse”.

“My intention was to note Tiger’s rules infractions this year, but comparing that to cheating in grade school went too far.”

Woods to his credit has maintained a silence throughout this ‘Chamblee-Gate’ affair, although he would be excused for wondering if a more formal public apology from Chamblee e.g. on air or via a statement as opposed to the brevity and expedience of social media, will be forthcoming.

Either way, he will be looking to turn the page on a difficult 2013, despite his five-win, Player of the Year performance, with the Chamblee comments come on top of a number of other disappointing situations involving Woods this year.

Aside from the rules incidents and a failure to win another major – extending that streak to over six years – the public spat with Sergio Garcia after the Spaniard claimed he had been distracted by Woods playing out of turn during The Players was unsavoury; with the ‘discourse’ between the two descending further with Garcia’s unfortunate ‘fried chicken’ remarks shortly after.

The media are unlikely to prise much by way of a detailed response from Woods on this latest controversy however his ongoing relationship with Chamblee and his primary employer, Golf Channel, will be interesting to watch in the future.