Weather permitting, Emerald Golf Club’s 18-hole course in Central Queensland should be returned to ‘reasonably good’ playing condition within six months – provided that more than $100,000 can be found for the necessary resurrection.

Emerald is one of numerous central Queensland golf courses ravaged by one of the worst summer floods in history, but club president Jamie Rolfe typifies the endearing spirit of those most affected. 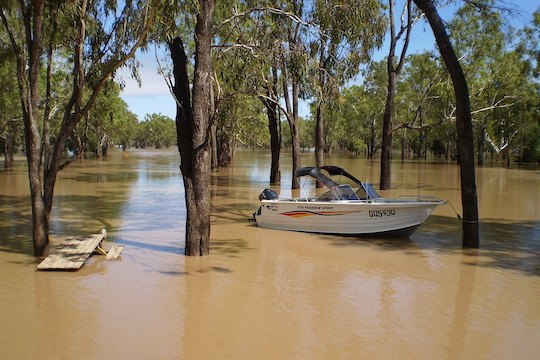 “We choose to live here for the lifestyle country towns and communities offer, and these are the natural disasters we have to accept,” said the former 11-marker who now plays off 16 following a recent accident.

“And every cloud has a silver lining. Some topsoil lost from the nearby Botanical Gardens has finished up on the course, so that has been an unexpected bonus for us.”

Rolfe and his wife Lesley also run two businesses in Emerald, including the local Retravision store, and he estimates flood damage there to be more than $200,000.

The carnage to the golf course, which sits on the banks of the Nogoa River, includes the total loss of the fifth green and major damage to all but the first and the 16th greens. The majority of the course was under water for almost two weeks.

Rockhampton Golf Club was spared major carnage despite the enormity of the flood that isolated the city for weeks, although club president Grant Vickery estimates the loss of trade over an eight-week period at more than $50,000.

Half the course was flooded, with the water covering various greens and fairways for more than a week. The damage mirrored what occurred in the 1991 floods.

“When we are able to get back on the course our members will dig in – as they always do – and I reckon things will be back in order by mid year,” predicted Vickery.

“Hopefully we can maintain our staff numbers and keep paying them, despite losing trade during our busiest time of the year. Everyone needs to stay positive.”

The other Rockhampton-based course, Capricorn Country Club, did not fare so well and may well be forced to close unless a government grant is forthcoming according to club manager Rodney Donaldson.

“What people don’t realise is that we had another flood go through our course three weeks earlier than the big one,” he said.

“In the 90 days leading up to new year, we lost 62 days of trade both on the course and in the club. The big flood totally submerged the golf course. Three months ago we added three new holes and they have been completely destroyed.”

Mr Donaldson said a minimum $100,000 would be needed to get the course back to reasonable playing condition.

Among other courses hit hard in Central Queensland were Baralaba and Moura, with both totally swamped. Parts of the Baralaba course were covered by up to three metres of water and floodwaters entered the clubhouse.

However the resort course at Yeppoon – Rydges Capricorn Resort – was playable on most days throughout the big wet. The sand-based course held up superbly according to club pro Graham Sheppard.

Further south, Bundaberg’s four golf courses were also affected, but not to the same extent.

Bundaberg Golf Club captain, Geoff Loveday, said that while actual floodwaters from the nearby Burnett River had not entered the course, run-off water covered numerous greens and fairways.

“We have had no golf here since Christmas, and the course is so saturated we have not been able to get on to it for mowing and maintenance,” he said in mid-January.

The other three Bundaberg-based courses – Bargara, Oakwood Park and Coral Cove – had each been just as much affected by the heavy rain as the floodwaters.