Coach to the stars Pete Cowen hit by Coronavirus

When it comes to coaching those who play the ancient club-and-ball game there’s none bigger and no-one more affable than Pete Cowen.

Cowen has coached nine Major Champions including the likes of Rory McIlroy, Graeme McDowell, Brooks Koepka, Louis Oosthuizen, Danny Willett, Darren Clarke, Sergio Garcia, Henrik Stenson and Gary Woodland along with fine-tuning the game of so many others to have accumulated more than 250 victories around the world. 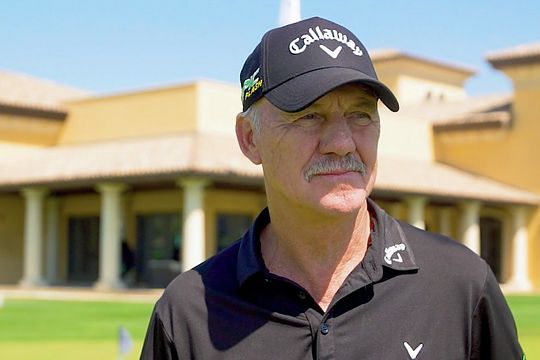 Cowen is to be found on the practice range and noticeable as always dressed in his black attire, and proudly adorned his Callaway sponsorship and it was on the TPC Sawgrass range and during the recently cancelled Players Championship where Cowen was again working hard.

So, it comes as a shock to learn that in returning home to England, Cowen confirmed he has contracted the Coronavirus and issued a plea for people of a similar age to take every step to ensure they do not contract the Covid-19 virus.

Good friend and colleague Jamie Corrigan at the Telegraph takes up the story:-

“You really don’t want this,” said Cowen to Jamie.

“I’m feeling horrendous and wouldn’t wish this on anyone; no matter how young and fit they may be.

“After a few days of self-isolation, we decided to ring the ambulance and the medics said I ticked every box on the corona sheet – low blood-oxygen levels, persistent dry cough, raging temperature, high heart rate,” Cowen said.

“They were fantastic, but said they were not allowed to test me unless I was admitted to hospital and then the staff there decided to keep you in.

“I was surprised, to say the least, and still find it odd, to be honest, but because of the bed shortages and because I’m in pretty good nick, I elected to stay put. I don’t want to alarm anyone, and I might just have been particularly ­vulnerable to it, but I’m not sure how anyone with an underlying illness could cope with this.

“I urge everyone to do exactly what the authorities are saying. I’ve told all of my players the same.”

Jamie reports Cowen’s range and academy in Rotherham, England has been closed indefinitely and, of course, he’ll be housebound for many months to come.

“I can’t see the Tour resuming for months and months,” he said. “But ­after a week off, getting their heads around it, I know all the pros will start practising and make sure everything stays in working order. Next week, I’m sure I’ll get a few videos sent through asking for my observations. Hopefully, I’ll feel up to it by then.”

All those who have met Cowen will wish him a successful passage through this worldwide health concern.