In 1958, Alliss won three National Opens in a row (Italian Open, Spanish Open and Portugal Open), while in 1961, he worked his first tournament as a broadcaster for the BBC – The Open Championship at Royal Birkdale – where he also played. He retired as a playing professional and became BBC’s lead commentator in 1978. 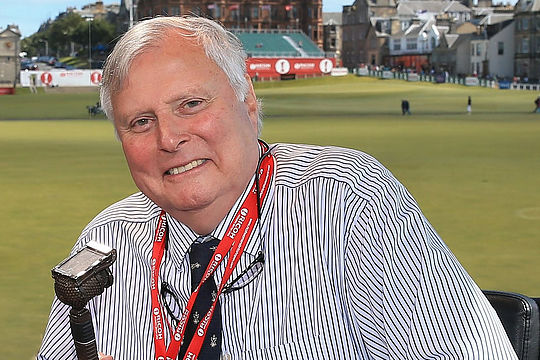 In a broadcasting career which would span over 40 years, Alliss would become widely renowned as one of the game’s greatest commentators, winning the hearts of Britain and the world with his dulcet tones and sharp wit.

As a much-loved broadcasting personality in Britain, he would appear on various television shows, while his illustrated book Peter Alliss’ Golf Heroes won the ‘Best Illustrated Book’ category of the British Sports Book Awards in 2003.

In 2012, Alliss was inducted into the World Golf Hall of Fame for his services to golf and just last month he commentated for the final time on the BBC’s coverage of the 2020 Masters Tournament from home.

“I only came into golf because my father was a golf professional, and I couldn’t do anything else. I left school when I was 15 and went as his assistant and followed on from there, and golf professionals or people in sport weren’t idolised as they are today. It was a different world, a different time,” said Alliss at his World Golf Hall Of Fame induction, where he famously gave a one-fingered salute at the end of his speech to the school teacher, who said he would amount to nothing in his life.

In my many years working the European Tour I never really got to meet Peter but I did so admire him.

He had a way of captivating the radio listener or the TV viewer and, at times, without saying anything. What I loved about his commentary was that he didn’t state the bleeding obvious as so many commentators do nowadays.

Who wants to hear a former multiple major champion or a fellow prolific winning golfer remarking: ‘Oh, he’s going to like that drive’ or ‘Now, that’s a great putt’.

This was at the heart of Peter Alliss, he told us stories, he even told us stories that had nothing to do with golf and he also regaled us with wonderful tales from his own golf career. He knew his subject matter and what Peter did best was he spoke with warmth and, if I can use the word, affection for his audience.

SKY’s Tony Johnstone is probably the closest we have to Peter Alliss now and you only had to listen to his impersonation of the ‘Go Away’ bird during the coverage of last week’s South African Open as he had me, and I’m certain thousands of other viewers, in stitches.

Without mentioning names but imagine the multi-awarding winning Jim Nantz even thinking of impersonating the ‘Go Away’ bird while calling the action at a golf tournament.