Could a major ever come to Asia?

It might happen even quicker than we thought. Suggestions of playing a major championship in Asia are beginning to turn from ripples into tidal waves.

Indeed if you listen to organisers of the recent HSBC Championship in China, they are already billing that event as “Asia’s major”. 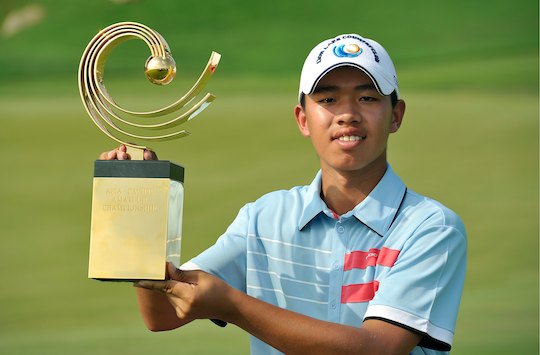 China’s 14-year-old rising star, Guan Tianlang, is one of a number of Asian golfers putting pressure on the PGA Tour to put more focus on the region

And if you look where some of America’s major players are at the moment, well, let’s just say players like Tiger Woods, Rickie Fowler, Dustin Johnson and Matt Kuchar are spending a lot of time in Asia, not solely for the money but also attempting to become true world players.

And officials are beginning to take note.

For instance when Inbee Park was chasing her fourth women’s major of the year at St Andrews earlier this year, she was given a 7am tee-time.

Why? Because that was prime viewing time in her home country of South Korea.

So catering for the Asia fans IS definitely a priority.

“What’s important is we boil down our missions to two pillars – serve our members and grow the game.

“The ultimate test will be can we check both boxes?

“Does it make sense to occasionally play the PGA Championship overseas?

“Would growing the brand globally help our members?

“Would it grow the game? Part two is easy.”

And if you think the wheels of motion are turning too slowly on this issue, think again.

It was not all that long ago that only three hours of the final round of the US Masters was telecast to fans.

And a little earlier than that golf was only ever telecast at the weekend.

“Things are coming together. It’s more a question of where the best players in the world are going to play, and it’s going to be a big deal wherever it goes.”

Yes, maybe an Asian golf major is closer than we thought.