The PGA of Australia’s prestigious Life Membership honour roll increased on Monday night with Randall Vines, Mark Duder, David Graham and William Husband all elevated to Life Members after being voted in by their peers at the PGA’s Annual General Meeting held at Royal Melbourne Golf Club.

Duder and Husband were both in attendance to officially accept their induction and humbled by the honour, particularly knowing their fellow PGA Professionals had supported their nominations, which were put forward by the PGA Board. 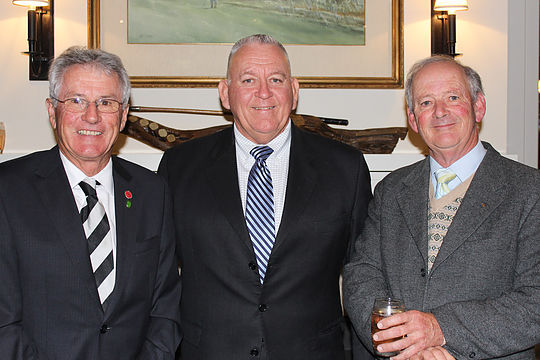 Duder, who recently received the WA Golf Industry Recognition Award for his contribution to golf in Western Australia, has been a full Member of the PGA for 50 years after arriving in Australia from Great Britain in 1961 and commenced his PGA Traineeship at the Royal Queensland Golf Club under the guidance of renowned PGA Professional Charlie Earp, before finishing at Royal Perth Golf Club under Charlie Newman.

Husband commenced his PGA Traineeship in 1963 with Mike Kelly at Roseville Golf Club and finished at Wyong Golf Club in 1967 under Tom Linskey. After coaching throughout country South Australia Husband moved to Tasmania in 1972 where he worked, until retirement in 2009, at Launceston Golf Club as Head Professional.

David Graham and Randall Vines were unfortunate apologies, but their contributions to the PGA have been immense. Vines has played on the PGA Tour of Australasia, European Tour and Asian Tour securing a number of wins across Australia and overseas, including back to back victories at the Australian PGA Championship in 1972 and 1973.

While Graham commenced his formative years as a Trainee under George Naismith at Riversdale Golf Club before a stellar tournament career which saw him become a two time Major winner at the US PGA Championship in 1979 and the US Open in 1981.

Although primarily competing in the US, Graham was a regular competitor on the PGA Tour of Australasia.

In July, Graham will enter the World Golf Hall of Fame and become the sixth Australian to receive induction into golf’s most honoured club