In what is quickly turning into an endless game of cat and mouse, former World No.1 and head of the Saudi-backed Super League, Greg Norman, has sent a scathing letter to the PGA Tour Commissioner.

Addressed directly to Jay Monahan, it opens with ‘Surely you jest. And surely, your lawyers at the PGA Tour must be holding their breath’, alluding to Norman’s ongoing belief that players are free to play wherever they want and any attempt to restrain them is treading on legally precarious ‘anti-restraint’ ground. 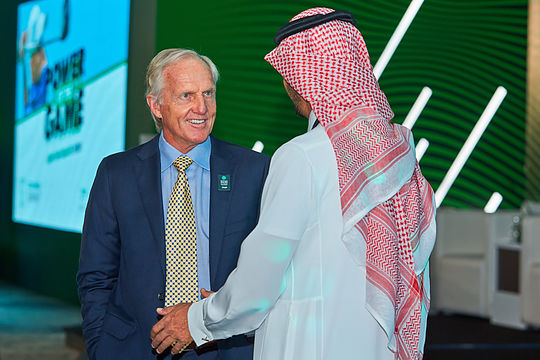 It was only days ago when Monahan, in a mandatory meeting ahead of the Honda Classic, told players “anyone on the fence needs to make a decision.” This is in stark contrast to what Norman wants to achieve, which is players being able to have the choice to compete on both the PGA Tour and any competing Tours such as the Super League.

“Simply put, you can’t ban players from playing golf. Players have the right and the freedom to play where we like. I know for a fact that many PGA players were and still are interested in playing for a new league, in addition to playing for the Tour. What is wrong with that?,” wrote Norman.

“What is wrong with allowing players to make their own decisions about where to play and how often to play? What is so wrong with player choice? Why do you feel so threatened that you would resort to such a desperate. unwise, and unenforceable threat.”

Norman is correct in what he says but the reality is somewhat harder for the players. If they stand up to the PGA Tour they risk losing support from fans and sponsors along with the opportunity to play in majors, although they are not under the direct control of the PGA Tour, and other top-level events such as the World Golf Championships and Players Championship.

Just this week, Phil Mickelson has found that out the hard way after losing long-time sponsor KPMG and Amstel Light with more companies likely to follow after his remarks surrounding the proposed Super League.

For many players, especially those at the very top of their game, golf is, to some extent, less about the money and more about the history. I think it’s fair to suggest that most golfers would play the Masters for free as they already do at the Ryder and Presidents Cup.

At Norman’s disposal is an almost unlimited amount of money; what he doesn’t have are the players. The likes of McIlroy, Morikawa and Rahm aren’t going anywhere so he will need to focus on the DeChambeau’s, Reed’s and Watson’s of the world, who operate a little differently and may just take the opportunity to jump ship if the price is right.

Even four-time major winner Brooks Koepka thinks that the breakaway league is not yet dead in the water.

“I think it’s going to still keep going. Everyone talks about money. They’ve got enough of it. I don’t see it backing down; they can just double up, and they’ll figure it out. They’ll get their guys. Somebody will sell out and go to it.”

The LIV Golf Investments money dump into the Asian Tour shows they are playing the long game there too. If they can provide solid pathways for the millions of Asian junior players now, they will be creating their own stars of the future and won’t need to be poaching from the PGA or DP World Tours.

Norman ended his letter with this ominous warning for the PGA Tour head:

“Commissioner – this is just the beginning. It certainly is not the end.”