In a concerted bid to curtail a dip in participation numbers, Drummond Golf are literally taking it “indoors”.

Golf simulators are being installed in Drummond golf stores all around Australia, beginning with Melbourne’s CBD, which will get three, in an effort to get golfers playing some of the world’s greatest golf courses – indoors. 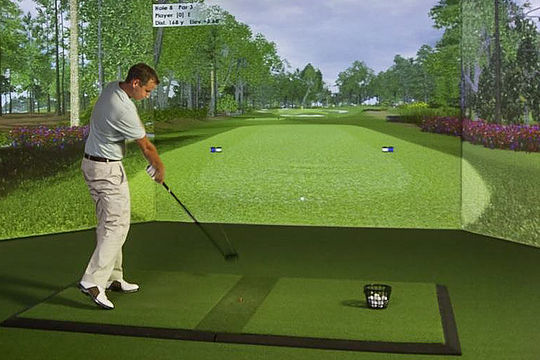 It’s perfect for people who don’t have the four or five (or even six) hours necessary to head to their local links for a game of golf.

And if their plan to put four or five simulators in each store comes off, up to 20 people can be playing golf at the one time – in each store.

If that doesn’t get the golf numbers up, then nothing will.

According to Drummond Golf’s managing director Mark Abeyaratne the plan is to help lure ‘time poor’ people back to playing golf, especially those who were prepared to

play indoors after work or with a social group for an hour or two at the most on the weekend.

“You see a lot of women head off to yoga or pilates of an evening,” said Abeyaratne.

“We’re suggesting ‘why not come and play golf on a simulator for an hour or two on a Wednesday night?’

“It is giving people an alternative form of golf that still has the raw elements of golf.”

“And it gives the sport the opportunity to engage with that 25-45 market.”

Drummond Golf boasts 50 stores which turn over at least $80 million annually since Abeyaratne, his brother Ravi and Jamie Cooke purchased the business in 2002, when it then had 12 stores and revenue of $14m.

The improving technology of indoor simulators, endorsed by the likes of Tigers Woods at this year’s Masters and US Open champion Jordan Spieth, suggests the indoor form of golf is growing in popularity in the United States and Asia.

And if Abeyaratne has his way we may one day see tournaments for Drummond customers as well as liquor licences for some of the venues as well.