It is one of the most talked-about – and indeed famous golf holes in the world.

Now that incredible 17th hole at Sawgrass in Florida, the site of the fifth major, the Tournament Players Championship has been rebuilt and copied in Australia.

Problems with a backyard dam brought about the construction of the dream hole that par-three from Sawgrass in the back paddock of Craig Perkins’ Southern Highlands property.

It’s just an hour south of Sydney and has already been tested out by the likes of seasoned professional Paul Gow in the company of former rugby union international George Gregan. 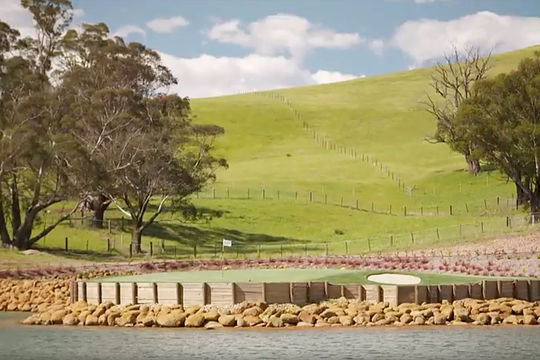 “I cannot believe how similar it is to the real thing,” commented Gow, who actually played the original during his time on the US PGA Tour.

“It all started because we were repairing a couple of bad dams that weren’t holding water,” said Perkins.

And the best part about it? You can take your golf clubs, stay on the property and play it as many times as you like.