It was built in 1922 and has been home to six US Opens, two US Senior Opens, two US Men’s Amateurs, the 2004 Ryder Cup and three PGA Championships including Australian David Graham’s win in 1979.

But now the century-old Oakland Hills Country Club clubhouse lies in ruins after fire swept through the cavernous timber structure in Detroit, Michigan. 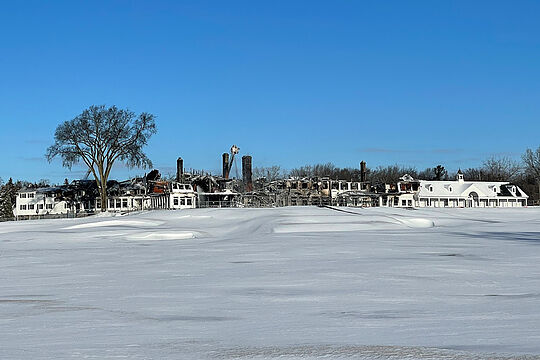 “This is a gut-wrenching day for Oakland Hills,” said club president Rick Palmer. “While we know that no one from the membership or staff was hurt, we have lost our iconic clubhouse, that housed our history and our place in Michigan and U.S. and international golf.”

“Oakland Hills is tremendously grateful to firefighters who were diligent in helping save some of our priceless pieces of memorabilia. It hurts to see this, but we are comforted to know that the heart and soul and legacy of the club resides in our membership and staff.”

“Only time will tell what is next, but we will move forward with a purpose to honour all those who made this grand building come to life with their golf and their work.”

And David Graham wasn’t the only Aussie success at the club, Curtis Luck became only the third Aussie to win the US Amateur title here in 2016.

Luck and Graham are among a laundry list of iconic names to win at the course including Ben Hogan’s 1951 US Open victory, Arnold Palmer and Jack Nicklaus’ US Senior Open wins in 1981 and 1991 respectively and Pádraig Harrington becoming the first Irishman to win the PGA Championship.

While the cause of the fire remains unknown, the USGA has pledged to help rebuild the historic clubhouse with the course slated to host the US Women’s Open in 2031 and 2042.