Dennise Hutton has been honoured as the first ever female PGA Professional to be awarded the prestigious Teaching Professional of the Year title, following the PGA’s NSW/ACT Division Graduation and Awards at Manly Golf Club this week.

Hutton, who bases herself at Bardon Park and The Ridge golf courses, received the award in front of a room of her peers, recognised for her outstanding passion and dedication to improving the games of golfers of all ability levels. 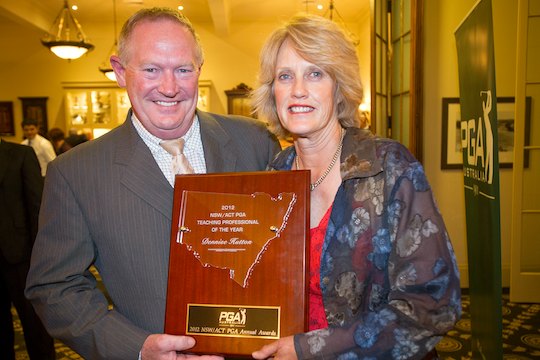 Having proven herself as both a player and a coach during her 25 year career to date, Dennise Hutton has achieved many firsts.

During her career, Dennise has drawn inspiration from working alongside some of Australia’s, and indeed the world’s, best golf coaches including Billy McWilliam, Norman Von Nida, Alex Mercer and Bruce Green to name a few.

“Women’s participation is one of the biggest potential growth areas for our game, and the continued success of role models the likes of Dennise will open up new opportunities for females who are looking to forge a similar career path within the Australian golf industry.”

In addition to her work in Sydney, Dennise also runs a number of golf schools, both interstate and overseas.

A former No. 1 ranked Australian women’s golfer, Dennise turned Professional after a very distinguished amateur career and went on to achieve many great successes including two victories at Australian LPGA Championship and wins in consecutive tournaments on the Ladies European Tour in 1989.

The other big award of the evening. the Club Professional of the Year, went to Jason Hart of the Shelly Beach Golf Club on the NSW Central Coast.

Other PGA Members recognised on the night included:

During the evening the NSW/ACT PGA also welcomed 16 graduates who were inducted as full Members of the PGA of Australia.

Australian cricket icon Doug Walters was also in attendance on the night as a guest speaker.