Courses along the Yarra River were some of the worst hit – namely the Kew, Green Acres and Latrobe Golf Clubs. 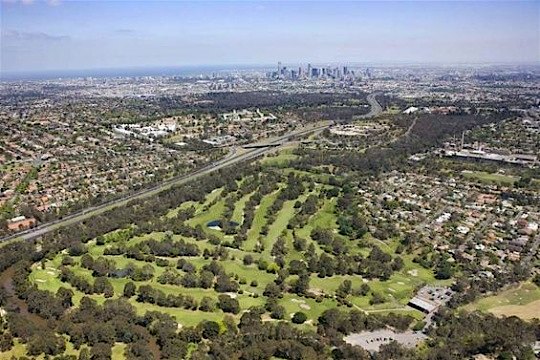 Water rose one metre above the Yarra River bank at Latrobe and sent all 18 holes under water.

“Every hole was affected. I’d say probably 85 per cent of our golf course was under water.

“The water is starting to recede as the river goes down. (There is) all the clean up and all the debris to get rid of.”

Kew Golf Club’s General Manager Paul Vardy said all of the club’s holes were under water except for the first, ninth and 18th holes adjacent to the clubhouse.

“So it gives you an idea when the greens sit up higher than everything else.

“The fairways are a bit brown. It looks like it’s got a big silt cover over the top so we will have to water that off.”

Vardy was hopeful nine holes would be opened after one week of closure and that the course could be returned into great condition, which occurred when Kew was flooded in November.

“It has some advantages,” Vardy said.

“It actually gives the golf course a rest. It’s just more the physical clean up. The process is that we get onto the greens and wash the silt off straight away and then spray the fungicide. Once it gets lower you clean out the bunkers.”

“The water started to inundate out of the river on Saturday morning and all the holes had some sort of water effect barring two (ninth and first holes),” General Manager Ian Robertson said.

“The water is currently receding but there will be a fairly long drawn out mopping up process. The big problem we have is what the water drops on your course and the condition in which it leaves your fairways.

So they’re fairly sodden for a while so I think we’ll be closed for the best part of this week and be reopening I suspect some time next week.

“It’s mainly debris such as the floating things that are left once the water recedes. It’s always a surprise what’s left whether it be wood or plastic bottles and then there’s the aftermath of the odour that it leaves in the area that’s been flooded.

“It’s all dependent on the weather that follows. You like warm weather to help it dry and also the wind.

“We minimise any vehicle travel around the course during this period because it actually turns the silt from all the deposits into mud.”

Robertson said the floods in November 2004 and February 2005 which caused nine weeks of closure collectively were far worse.

Nearby Ivanhoe Public Golf Course was also worse for wear with reportedly up to 75 per cent of the course experienced some flooding.

Melbourne’s sandbelt was also slightly affected by the storms.

Royal Melbourne received 160mm of rain and was closed on the Saturday following the storms.