While recognising they are much better off than many golf courses throughout flood-ravaged Queensland, members of the new management team of the iconic Palm Meadows course on the Gold Coast are praying for sunshine.

General manager Mark Bath estimates that rain has fallen on as many as half the days since the course re-opened on December 1, and says to date the new venture has been challenging. 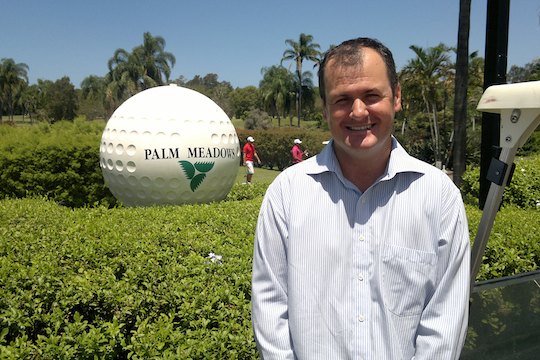 “Trying to get the course back to the condition it was before the previous owners closed it on June 30 has been difficult,” said Bath.

“In those five months general maintenance was maintained, but at nowhere near the level required for a championship golf course. We have done as well as we can under the conditions, and I suppose it is back to 80 per cent of where it was when the course closed.”

But Bath said given a month or two of ideal weather conditions, he was confident Palm Meadows would be as inviting and enjoyable as ever.

A local Gold Coast-based company, GC Golf Management, has leased the testing 18-hole layout which was one of the original Queensland resort courses.

The Graham Marsh-designed course closed at the end of June and appeared set for development until GC Golf Management stepped up to the plate. The company has taken an initial two-year lease, with two by two-year options in its favour.

The original focus of attracting local golfers and offering them a stellar golf course at affordable prices, continues. And Bath describes the response, considering the weather, as enormous.

“Since we opened, the course has been just about chockers every day we have had fine weather,” he said.

“In fact the response has been quite amazing. People are genuinely wrapt we have been able to keep Palm Meadows open because it has a special place in the hearts of a lot of golfers.”

“Many who have played here since we re-opened have commented on how they recall the halcyon days when the likes of Curtis Strange, Greg Norman, Ronan Rafferty, Ian Baker-Finch and Brad Faxon played in the Palm Meadows Cup. They want the history to stay and understand that we have been up against it with the weather.”

The opening special of $49.50 for 18 holes in an electric cart has been on offer from December 1, and will continue through until the end of February. But after that playing golf at Palm Meadows will still be very affordable, with Monday to Friday rates at $59 for 18 holes, and $69 on weekends and public holidays – in a cart.

Memberships are also affordable, at $1095 for walkers and $1795 in a cart, for unlimited golf. Already the stage one target of 200 members has been reached. Stage two and stage three objectives are also 200, with the long-term goal to have between 600 and 800 members.

“We realise we have a special facility here, centrally situated on the Gold Coast and a golf course that is literally loved and respected by many golfers,” Bath said.

“And in time, with the right weather, we intend to bring it right back to where it was.”