It’s a market that has been virtually ignored – so far.

Yet about half of Australia is inhabited by people who were born overseas or their parents migrated to Australia. 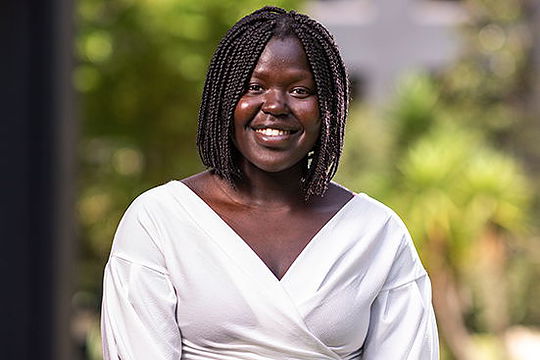 Now Golf Australia has decided its time to find them, welcome them into our golf clubs, and show them how to play the game.

In an innovative move, Golf Australia has appointed former Sudanese refugee Sabrin Nyawela to the position of participation officer.

The appointment has come about because research in 2018 showed that there was an appetite for the game so long as the communities felt that they were being welcomed at a club.

Which is where Nyawela, 20, fits into the picture.

Golf Australia wanted someone with experience of dealing with the issues of immigrant communities, not necessarily a golfer.

As for Nyawela, she’s learning the nuances of the game, having done nothing more than a few hits of mini-golf growing up.

“On the outside, as a non-golfer, a lot of people think of golf as elite, that it’s only for old, retired people who are wealthy,” she said.

“But my first day coming into the office, everyone was so welcoming.”

“Even going to Adelaide for the Women’s (Australian) Open, everybody there was kind and welcoming.”

“If we can get that side of the story out, we can change the perception.”

“I feel like there’s a big focus on the elite, the high-performance side of things.”

“We want to bring it down to a local level and find future participants in the game.”

“We always knew there was a big opportunity, if you look at how diverse Australia is,” he said.

“What we wanted to know was if there was an appetite for golf in the first place.”

Hamilton said there were two aspects of the research that were noteworthy. First, that many immigrants believed that it was not possible for them to play golf, “based on the experiences they’d had in their original countries”.

Second, that if the opportunity was available then large numbers might well take part.

“We hadn’t been into that space before,” said Hamilton.

“The really good thing was that they said that if they felt welcome at a club, that it wouldn’t be just one or two who’d come to the game. They felt that their whole communities would come into the sport.”

“What we were looking for with Sabrin is someone who’s experienced working with those communities and understanding what those barriers are.”

“The other cool thing about Sabrin’s skillset is that she’s a non-golfer.”

“To have someone who can put that non-golfer lens over everything we do is fantastic.”