No longer do “we” golfers have to wear that slur. You know the one: “You’ll never get fit and lose weight playing golf”. 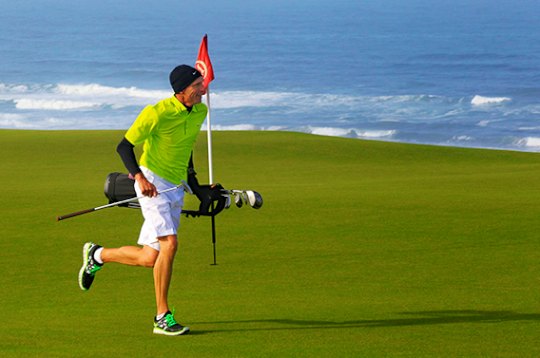 Basically Speedgolf is a fun and fast alternative to traditional golf – and one that will definitely improve your fitness.

With health benefits being a key driver for participation in sport, the game involves playing a round of golf in the shortest possible time and in the lowest possible number of shots.

The sport is believed to have begun in the 1970′s when a number of golfers began setting and chasing the world record.

The current world record was established in 2005 when American Christopher Smith shot a five under par 65 in 44 minutes and 6 seconds.

“Speedgolf is a good example of an innovation that may help people who are struggling to find time in their lives to play a normal full round of golf.

Australia hosts its first international qualifier on September 15 at Federal Golf Club in Canberra for the World Speed Golf Championships in the US.

The 2014 World Speed Golf Championships will be played at Bandon Dunes Golf Resort in Oregon on October 25 and 26.