Did you ever hear the tale about how divers had to get golf balls out of the canals around the RACV Royal Pines Resort on the Gold Coast within a few days before the crabs got hold of them and started squeezing them with their claws and scuffing them, rendering them useless?

Amazingly, that is true – but the men and women who dive for them deserve special mention as well. 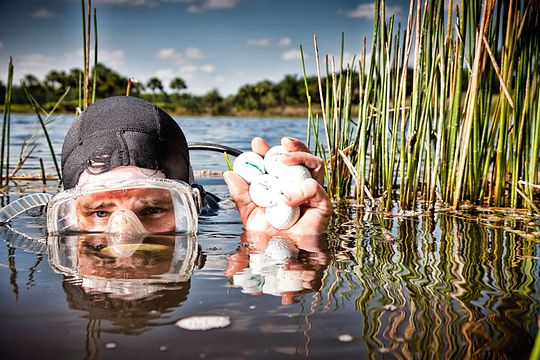 That’s because “golf ball diver” has been listed as the world’s weirdest occupation in a list compiled by Shockpedia.

And I don’t know what you think, but I know I lose scores of balls each year – and on some Australian courses like Stonecutters Ridge on Sydney’s outskirts, you are advised NOT to go hunting for your ball by officials as snakes abound in the rough.

Americans alone lose something like 30 million golf balls a year in water hazards, trees and out of bounds.

At the TPC at Sawgrass, the venue for the US PGA Tour’s Players Championship, staff retrieve around 100,000 golf balls a year just from around one hole…you guessed it, the water guarding the infamous island green at the 17th hole.

Shockpedia suggested golf ball divers could earn from anything from $50,000 to $100,000 annually collecting submerged golf balls – before the crabs get them!

Here is order is Shockpedia’s listing: