Every Australian club golfer who wants to play the magnificent Royal Melbourne golf course or drive a luxury Lexus IS 250 X Special Edition sedan will get the chance to do so when the Lexus Cup powered by Golf Link launches its second season on March 1.

The innovative competition, which saw more than 35,000 Australian club golfers tee up in its inaugural season in 2012, has proved so popular there will be two rounds of qualifying in 2013, two luxury Lexus sedans to give away and twice the finalists to Royal Melbourne. 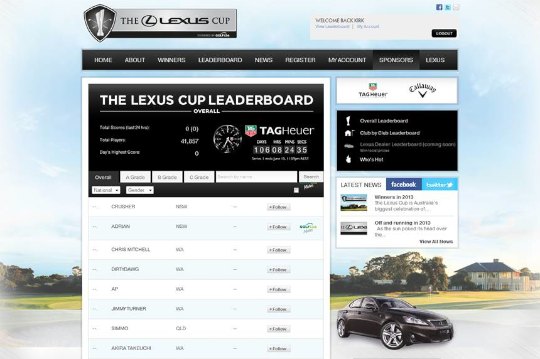 Lexus, one of Australia’s most prestigious vehicle brands, has signed on as sponsor of the event for another two years after the success of 2012 and co-sponsors Callaway Golf, Go Golfing golf tours, Australian Golf Digest and the Golf Link Wine Club will be joined this year by new partner and Official Timekeeper TAG Heuer to add even more incentive for competitors in 2013.

The Lexus Cup powered by Golf Link is the most innovative golf competition seen in Australia for decades. It is free to enter and all club golfers need to do to participate is register their name and play a minimum of six rounds during one, or both, of the 13 week qualifying periods.

In addition to playing for thousands of dollars worth of weekly and monthly prizes at club, state and national levels, by simply playing the minimum number of rounds to qualify – whether you score 40 points or 14 – participants are entered into the draw to win an all new Lexus luxury car in each Series.

A national on line leaderboard is updated daily at the Lexus Cup powered by Golf Link web site so competitors can follow their progress in the competition, which sees two winners from each grade in each Series flown to Royal Melbourne Golf Club for the 16 person National Final, including a day in the Lexus Marquee at the Melbourne Cup.

The 8 lucky players who made it to the final last year all sang the praises of what was a once in a lifetime experience for most – and there’ll be 16 in 2013.

This year there will be two lucky contestants driving away in brand new vehicles with each of the 15 week qualifiers giving away a Lexus IS 250 sedan valued at up to $65,000.

Registration for the 2013 Lexus Cup powered by Golf Link is open now at www.lexuscup.com.au