Somehow women’s golf in this country seems to be able to capture two week’s attention without missing a beat while the men’s game struggles.

Perhaps promoters Bob Tuohy (The Ladies Masters) and IMG (The Open) are just lucky to have a spot on the calendar where not much is happening. 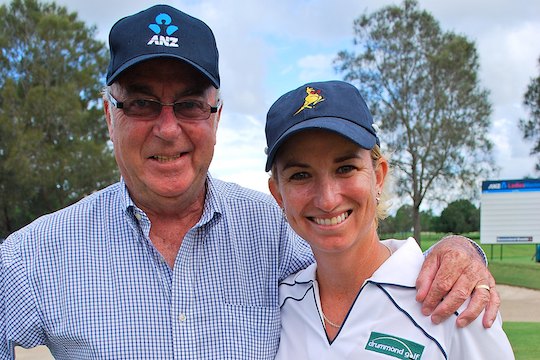 The February fortnight falls after a summer of relentless cricket and before either of the main football codes – rugby league and AFL – have cranked up.

So we were treated to a couple of superb weeks of women’s golf where Taiwan’s Yani Tseng claimed both titles and the No 1 ranking in the world.

She may not have been a stand up comic and at times the TV coverage could have been a little dull as Tseng turned both events into a procession.

However it would be churlish to suggest she is anything but a damn fine golfer.

Women’s golf has progressed enormously in this country in the past 20 years and this is in no small way due to the resilience of Adelaide-based promoter, Bob Tuohy.

Whether by luck or design – perhaps a bit of both – Tuohy has been the white knight for women’s golf in this country.

He’s had the Masters entrenched on the calendar for more than 20 years and was the only promoter prepared to revive the Women’s Open in the 1990′s when nobody wanted to take the risk.

The Open eventually passed to IMG hands – another story for another day – and while it has not always commanded a comparable field to the Masters, has been played almost every year since.

This, year too, Golf Australia CEO Stephen Pitt, managed to have the Open slotted in ahead of the Masters which guaranteed a stronger field because players committed to two weeks in Australia instead of one. This was far from the case when the Masters preceded the Open.

Hats off to Pitt, then, who juggled the dates to serve the best interests of Golf Australia, the national amateur golfing body he is charged with running.

Golf Australia is clearly hoping the same thing will happen now the men’s Australian Open has won the prized date later in the year a week ahead of the President’s Cup.

Even though the men’s Australian Open will be played in Sydney, officials would be delighted if as few as two members of the American President’s Cup team decided to play.

The cynic in me, though, tells me it won’t happen and that’s a pity.