Professional golfer and coach-of-champions Ian Triggs is teaming up with Brookwater Golf and Country Club to bring the world-famous Ian Triggs Golf to Queensland’s number one golf course this July.

Brookwater Golf and Country Club is now fully-equipped with industry-leading coaching facilities, with Ian Triggs and his team providing clinics and lessons to golfers of all ages and experience. 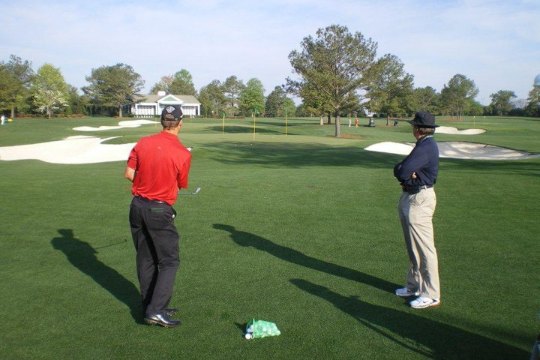 Ian Triggs, who has been coaching since 1978, said the new coaching facility will give him the chance to re-establish himself in Brisbane after more than a decade of coaching elite players abroad.

“I’m really looking forward to winding down and establishing myself at the beautiful Brookwater Golf and Country Club,” Mr Triggs said.

“The Ian Triggs facility at Brookwater will be the only one in Australia, so it will be great to have a base again after so many years of travelling,” he said.

Mr Triggs, who coaches seven-time major winner Karrie Webb as well as PGA Tour player John Senden and LPGA star, Sarah Kemp, said he will be working towards developing Brookwater into the ultimate destination for coaching and development.

“This is a great opportunity to get back into coaching at a grassroots level, and to work towards developing Brookwater into a hotspot of emerging professional golfers,” Mr Triggs said.

“We’ll also be teaming up with the existing Kookaburra Club at Brookwater to create one of the best facilities for children’s golfing development, as well as offering a range of programs and one-on-one lessons for golfers of all ages and experience,” he said.