JNJG: Providing A Pathway For Our Future Stars

Golf is often heralded as an individual sport – one player against the course. And while in many respects that may be true, next-level success particularly from the junior ranks can be fostered when the game takes a team approach.

Team-based golf stimulates passion and addiction. That’s one rationale applied by the Jack Newton Junior Golf Foundation (JNJG) which was established in 1986 to introduce more young people to the game of golf and to nurture their skills and enjoyment of the sport. 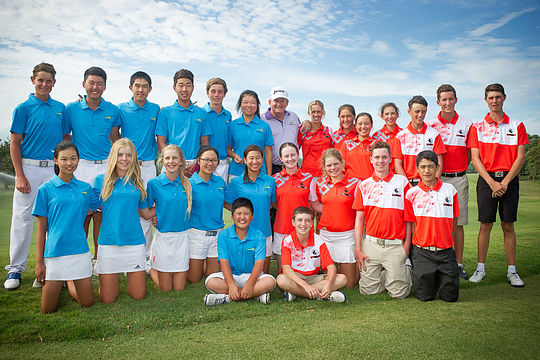 The objectives of the JNJG are to establish and service a variety of golf programs for boys and girls that create pathways through the sport and cater for the beginner through to the elite.

“As part of the development process we have purposely underpinned junior golf in our system with a pathway of team competition,” says Peter Van Wegen the Chief Executive Officer.

“This ranges from our Encourage Shield competition which is aimed at all-handicap levels, the Junior Pennant series across the State, right up to our State of Origin series where you have the best NSW player of each age group in 12-13-14-15-16-17 years playing against the best from Queensland in a Ryder Cup similar format.”

Golf as a sport closely parallels real life as players experience the highs and lows of the game. From birdies to triple bogeys, golf rewards a young person’s ability to keep each shot in perspective, manage emotions, maintain a positive outlook and focus on the shot at hand.

It’s these real life experiences which the JNJG sees are critical for the game’s development as well as for players to have the opportunity to reach their full potential.

“A lot of golf is played individually and we run a tour of individual events such as the Jack Newton Junior Masters Series and the State Championships,” says Van Wegen.

“We also want to educate the general population that golf is not just a individual game but also can be a team sport. We see it as imperative to provide team events across the whole state, not only in metropolitan Sydney, as part of our purpose.”

“It benefits clubs and it develops a competitive schedule in a similar way to the PGA Tour.”

A decade ago, when a young Californian named Tiger Woods was the world’s best player, golf looked like an unassailable national undertaking in the US and in Australia we already had ridden the Greg Norman wave for some time. Kids flocked to the game.

Since then the game has met a few challenges, yet foundations such as the JNJG continues to provide the structure to enable junior players from all levels to play golf.

The Jack Newton Junior Golf Foundation have not only lowered the ‘barriers to entry’ to an historically exclusive sport but leads the way in Australia in providing any young gun the opportunity to compete and reach their full potential through individual and team competition, to even one day make it to the PGA or LPGA Tour.