Ocean Dunes on King Island is close to opening 6 brand-new holes on the back nine to complement its front nine, which has been enjoyed by golfers from all over the world since October last year.

The unveiling of the back nine holes will give golfers the opportunity to play 18 holes on the spectacular coastal course. 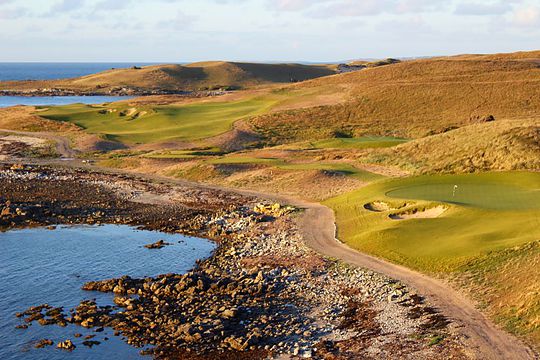 The stunning par-three tenth, which plays across 3 Rivers Bay, the 11th, 15th, 16th, 17th and 18th holes will all be available for play. Golfers will have the option of playing the three-hole loop of the 10th, 17th & 18th for a second time from different tees.

It affords golfers an 18-hole prelude to the opening of the entire course.

The recent purchase and upgrade of the King Island Hotel – just 5 minutes from the course – by Ocean Dunes provides golfers and other visitors with a comfortable and convenient place to dine and bed down after a day’s golf or touring the Island.

A golfer’s lounge, where players can relax with a beer or glass of wine in front of an open fire, will be a highlight of the revamped hotel.

Graeme Grant, who has lived on King Island since 2013 designing and building the golf course, has been fighting the elements for the past year with record low rainfall delaying plans to open the entire course in February. He is optimistic that, once open, golfers will be buoyed by the course’s condition, strategy and spectacle.

“Even though we’ve had drought conditions to deal with, our greens, tees and green surrounds have remained in excellent condition and the response to the course from players has remained extremely positive,” Grant said. “A day of rain recently yielded 50 millimetres, which has brought about a remarkable recovery in the fine fescue fairways.”

In a throwback to links golf and the ‘home of golf’ at St Andrews, Ocean Dunes will feature a giant double green serving the par-five 12th and the long par-four 15th holes.

“The common green comes from that Scottish links model and I like the idea of large expanses of fine turf, which I think adds a certain lustre to the golf course,” says Grant.