Kingston Heath Golf Club has entered a new era as a tournament venue this month, appointing of a new course superintendent. 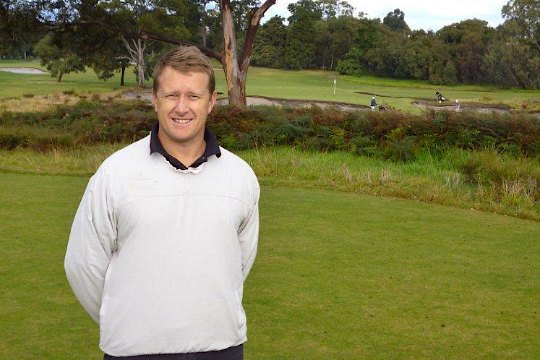 Mead, who brings with him seven years experience in the top job at Spring Valley, will kick off his tenure at Kingston Heath on June 27.

As the Australian golf world counts down to Kingston Heath’s hosting of the Australian Masters in November, Mead says it’s a dream promotion in the world of Australian turf management.

“Kingston Heath and Royal Melbourne, they’re right up the top of the mantle so that was always a career move that was sort of the ultimate move for me. It was good news to get the nod so to speak.”

The 36-year-old was offered the position in early May and says it was both sudden and unexpected news.

Mead was at the helm for four Victorian Opens at Spring Valley, including this year’s revolutionary tournament setup, which saw the revival of the Women’s Victorian Open staged concurrently with the men’s championship.

He says presenting Spring Valley for those events would have played on the minds of the powers-that-be at Kingston Heath.

“I think that probably influenced the committee so to speak in employing me. You’re basically prepping up the same.”

The relationship between Spring Valley and Kingston Heath is a close one both geographically and in terms of turf.

As the crow flies, the courses are about three kilometres apart.

Turf-wise, Mead will be greeted with similar grasses at the Heath and the cushion of a much beefier budget to work around.

As a teenager, Mead played the occasional round of golf at Long Island Country Club near Frankston with his father – sowing the seed for his future career.

“My father got me into the industry. He was a fairly handy golfer himself and he was the captain of Long Island Country Club.”

Mead’s journey in the turf industry began as a 16-year-old volunteering with Long Island’s maintenance staff.

A year later, Mead landed an apprenticeship at Spring Valley, kicking off his 19-year stint at the club.

“From there on, I knew that’s what I wanted to do for the rest of my life.”

Mead will spend this month with a group of Australian superintendents in Europe to catch a glimpse of foreign turf management strategies.

Scotland, Ireland, Belgium, France and a trip to this year’s British Open venue – Royal Lytham and St Annes – are all part of his travel itinerary.