A former member of the Ladies European Tour and ALPG Tour in Australia, Anne-Marie Knight has shown what is possible in the golfing industry here in Australia.

On a night which celebrates the achievements of South Australians working and competing in the game, it was the girl who grew up in Renmark, three hours out of Adelaide who stole the show. 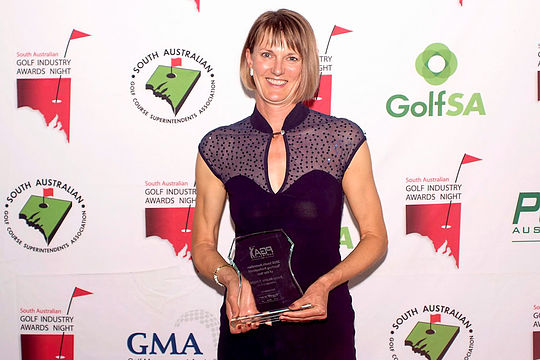 “It is such an amazing honour to be named the Teaching Pro of the Year and I am very humbled to be given the award by my fellow PGA Professionals,” said Knight who is based out of Adelaide Shores Driving Range and has been guided in recent years by PGA Life Member and South Australian golfing icon Peter Ormsby.

“I really have had an amazing support network around me with my husband and family being incredibly encouraging and allowing me to chase my dreams and pursue this career in golf which has given me so much.”

Knight has excelled in recent years since completing her PGA vocational bridging course in 2008 which followed a career playing professionally around the world.

“Its been an amazing opportunity to move into the coaching industry and I really have learned so much from my mentors and the people who gave me a chance including PGA Pros Matthew Dent and Peter Bickley early on when I began my PGA bridging here in Adelaide,” added Knight.

Knight has made incredible strides working with several charities and groups which aim to assist the disabled and disadvantaged including the younger onset dementia group and the handicap for kids group.

“I think the PGA has come a long way in providing mobility and acceptance opportunities for groups like the ones I work with but we still have so many great opportunities to provide a better standard of living to people who need it and can benefit from the game of golf,” added Knight.

Pritchard will join Knight on the Gold Coast in December for the national awards presentations which are held in conjunction with the annual Greg Norman Medal.