Lorne gets set for $50m facelift

Construction of a $50 million development at Victoria’s Lorne Country Club is set to commence later this year and would see the current nine-hole layout renovated and an additional nine holes added.

“It’s been in the pipeline for the best part of a decade,” said Ross Perrett, who would spearhead the overhaul of the course layout as part of Thomson Perrett Golf Course Architects. 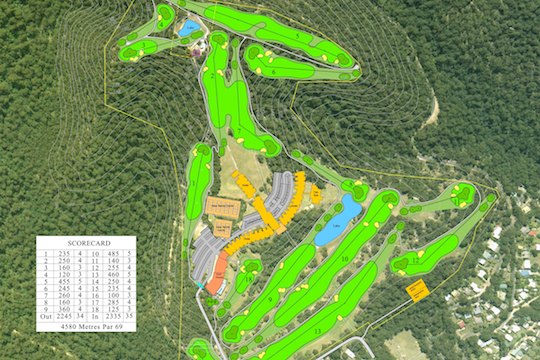 Construction can only commence once sufficient pre sales of apartments have been made, which could occur as early as spring.

Managing director of Experience The Otways, Adam Adamczyk, and wife Tracey, have worked tirelessly with Lorne Country Club for 10 years to secure building permits and ensure the development would go ahead.

“The club always had a vision to create an 18-hole course but it was always limited by finance,” he said.

Adamczyk said the Surf Coast Council had been largely supportive of the proposed development but initially didn’t want the extra nine holes built because it would require removal of native vegetation.

Osprey, as the residential development is known, would be built on the first half of the existing par-five first hole and the area immediately to its left.

Perrett said the additional holes would provide a unique experience for golfers.

“It’s a pretty stunning bit of land (with) stunning scenery,” he said.

“It’s got quite a few shortish par-fours but the terrain’s pretty hilly so they won’t be easy.”

Perrett predicted the experience of the future third and fourth holes – back-to-back par-threes of 160 and 120 metres respectively – would be similar to the dramatic par-three seventh at the National Old Course overlooking Bass Strait.

“Some of the land that we’re going into up above is very attractive,” Perrett said.

“There are a couple of par-threes that are pretty special. You can imagine the landform (where) you go out to a little point and then the land just drops away. You’re hitting (to) a par-three across to an island green almost. There are a couple of holes like that that will be pretty popular.”

The current third, fourth, sixth and eighth would remain largely unchanged but multiple bunkers would be added to each.

The current par-four seventh would be lengthened to become the 485-metre par-five 10th and would protrude onto the bottom of the current first fairway.

“The ninth stays the same but there’s a bit of argy-bargy around the first and second and the first nine’s much the same as it is at the moment in layout,” Perrett said.

Sacrificing the spectacular first hole would be necessary for the improvement of the layout according to Perrett.

“That’s disappointing but often we have to make trade-offs like that,” Perrett said.

“It’s a dramatic hole that first hole as it is at the moment.”

Perrett said that the current layout is enjoyable to play but the 18-hole redevelopment would be an improvement.

“It’s a fun weekend course (and) there are a lot of guys I know who love playing it,” he said.

“There wouldn’t be an opportunity to fix it up if we couldn’t find some suitable land for building.”