Luke Elvy: A Bird (Finchy) in the Hand

While I was at Valhalla for the PGA, news broke of Ian Baker-Finch’s selection as Australian Team captain for Golf at the 2016 Olympics. It’s been a fortnight since the announcement and I’m still applauding the decision.

Admittedly, I’m close to the man affectionately known as Finchy, and that statement could be seen as biased. But such is his standing in the game 100,000 people could say exactly the same thing. Baker-Finch is a hugely respected figure. 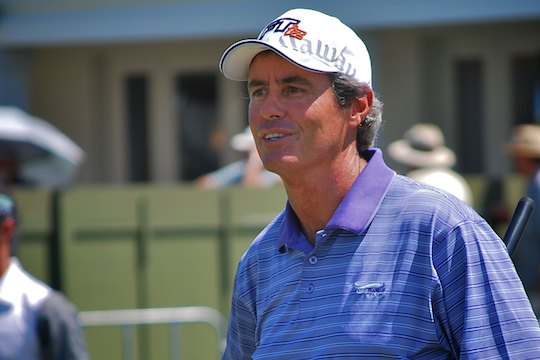 His appointment by the AOC to head up our team in Rio works on a number of levels. Here’s why it’s a great outcome for Australian golf and why things like this should happen more often with all of our major champions.

The players love him. Truth is everyone does, but the players who will likely qualify for Rio – Adam Scott and Jason Day plus Karrie Webb and Minjee Lee – will appreciate Ian’s advice and support. Rest assured Baker-Finch will put his heart and soul into the role.

“Absolutely over the moon,” said the 53-year-old. “To think at my age and position in the world of golf, I’m going to get the chance to be an Olympian. It’s a once in a lifetime opportunity, and one I’m going to treat with the utmost respect.”

He’s a proud Australian. Despite spending the majority of his adult life overseas, Finchy never misses the chance to talk up the Aussie boys on the PGA Tour while commentating for CBS. He’s twice as parochial off air and returning home to the Sunshine Coast is one of the highlights of his year.

“I really want to knuckle down and do everything I can to do the best job I can and make sure my teams fulfil their overall experience.,” added Baker-Finch.

It’s time Australians started cherishing its major winners. In the history of golf, we’ve only had 10 men and just two women win one of the big four – Finchy is one of them. It frustrates me that they are not celebrated or revered like they are in America.

David Graham, Greg Norman and Jan Stephenson are too disconnected from Australia. Admittedly, the Shark is paid to be an ambassador from time to time, but imagine the media interest if all surviving major winners were at an Annual Gala event.

Golf is a game where the history is rich and it’s the thread, which ties all the generations together. Without the exploits of Peter Thomson the era of Norman, Grady, Baker-Finch and Elkington doesn’t happen and without Norman, there’s no Adam Scott or Geoff Ogilvy.

If I asked you to name the five Australians in the World Golf Hall of Fame, could you do it? Did you know Kel Nagle is our oldest living major champion? Can you tell me how many majors Stephenson won?

There are so many ways to embrace our major champions and the appointment of Baker-Finch as Olympic Team Captain is one of them. Rest assured Finchy will represent Australia with distinction, like he always has.

I’ll leave you with his departing words, “really looking forward to it… I’ll do my best to make sure we bring home the gold from Rio.”