Luke Elvy: These Guys Are Slow

Pace of play is hardly a new issue in golf, it’s been suffocating the game for over a decade. It stems from a lack of administration and leadership.

But the biggest problem is the knock-on effect it has on the amateur game so again I ask the question, why isn’t anything being done about it? 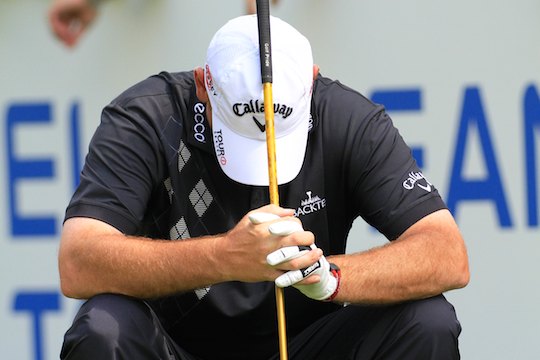 Luke Elvy: These Guys Are Slow

This week on the PGA Tour many players aired their frustrations as play meandered along at TPC Scottsdale over the first two days.

This tweet from Columbian Camilo Villegas summed it up best, “Ok. 5 hours to play 16 holes today… do we have a pace of play problem on the PGA Tour??”

Five hours for 16 holes and not one player gets penalised or fined for slow play, are you for real?! Why do officials constantly turn a blind eye to one of the biggest reasons why people are turning away from the game?

One player, Guan Tianlang, has been penalised for slow play in the past 20 years on the PGA Tour. He’s that 14 year-old wunderkind amateur from China at last years Masters Tournament. The same event he became the youngest to make the cut in, but only just.

He was a scapegoat that day. Why? Because he’s an amateur. The last professional to get pinged was Glen Day way back in 1995.

There’s no way there hasn’t been a ‘slow play’ breach since. Even Kevin Na avoided any sanctioning during his “trigger troubles” in 2012 and it takes that guy an hour and a half to watch 60 Minutes.

The argument, which gets used most in the players defence, is “they’re playing for millions.”

While I understand every shot counts, if they were forced to play in a certain time limit, they would. It’s as simple as that.

Two-shot penalties or significant monetary fines would hurt, even for the wealthiest among them. The best in the world are the fiercest of competitors.

But the biggest problem is the flow on affect to the recreational game. This tweet by Golfweek’s senior writer Beth Ann Nichols describes the cancer it has caused at the amateur level.

“Guy next to me in the gallery says to his buddy ‘I think I see our problem. We play too fast.”

No you don’t, even if you play in three hours, you don’t play too fast. To be honest I can’t remember the last time I played in 4 hours.

Pre-shot routines and lining putts up from every angle is fine when you can break 70, most club golfers struggle to break 80.

The greatest of all-time Jack Nicklaus has been working closely with the PGA of America to implement 12-hole golf. I was fortunate to be at one of their meetings and was sold on its merits that very day.

Don’t tell me more people wouldn’t return to the game, especially if it only took three hours or less.

Two things need to happen for slow play to be dealt with once and for all. One is acceptance of the problem. The other is taking action to fix it.

Sadly, Golf’s administrators don’t have a great track record of being the swiftest of workers.

In the meantime, maybe the PGA Tour should change its slogan to ‘These Guys Are Slow’.