Fellow Scots and some of the stars of the European Tour have paid tribute to renowned caddy Dave Renwick who has passed away.

Renwick, 62 stopped caddying a year ago when he began experiencing chest pains while caddying in the States for Korean KJ Choi. 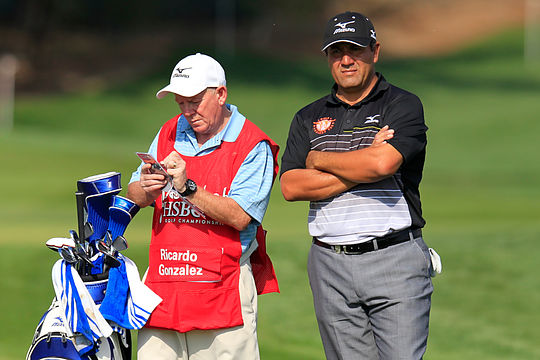 He was diagnosed with cancer and informed he had two to four months to live but then passed away just short of a year late on Wednesday evening at his East Calder residence.

Renwick began caddying when he was just 11 years of age and after a few years working on North Sea oil rig he turned up looking for to caddy at the inaugural 1983 Glasgow Open at Haggs Castle.

“I remember that day as he knew absolutely nothing about yardages,” said a smiling Ian ‘Edinburgh Jimmy’ Rae who caddies for Paul McGinley.

But then Renwick was a quick learner as no sooner had he found his way onto Jose Maria Olazabal’s bag, then only his early 20s and also new to the Tour, and incidentally turning 50 today.

He went back to work for Olazabal in 1986 and caddied for the Spaniard through to 1994, winning 14 European Tour titles including the 1994 Masters and two other times in the States.

However his time with Olazabal was not always plain sailing.

During a Volvo Masters at Valderrama, Renwick dumped Olazabal’s bag of clubs on the course mid-round and walked off saying: “I’m not going to be treated like that anymore.”

Olazabal’s manager, Sergio Gomaz stepped forward to carry the clubs for the rest of the round.

The pair then chatted over a drink in the bar afterwards and resumed together the next day but they split up soon afterwards.

Renwick was caddying for South African Fulton Allem at the 1994 Open Championship when Australian Steve Elkington approached him to work with him on the PGA Tour. They won later that year ahead of capturing the 1995 PGA Championship and in the process denying Colin Montgomerie.

In June 1997, Renwick teamed-up with Vijay Singh in what would be the greatest period of his caddying career with Singh winning seven times, including the 1998 PGA Championship and 2000 Masters, before they split in August 2000.

However he returned to caddy for Singh at the 2003 U.S. Open and a year later helped steer Singh to reach World No. 1 in calling the shots for seven of his nine victories in 2004 which included the 2004 PGA Championship.

When asked about Singh going to World No. 1 Dave responded: “Yeah, we beat Tiger (Woods) the last day and birdied three of the last four holes to overtake him in the world rankings with a win, as well.”

Four-time Major winning Ernie Els, who shot an opening round 68 in Dubai, also spoke of his fondness for Renwick.

“I knew Dave very well and even when I came out as a youngster, he was a legend as both a caddie and a person,” said Els.

“Davie and I had lots of great times together. Whether we were in the US, Europe or Asia, he was a very good friend of mine.”

In his later career, Renwick caddied for Adam Scott, Thorjborn Olesen, Graeme Storm, Gareth Maybin, Ricardo Gonzalez while he ended his European Tour career with fellow Scot Chris Doak before moving back to the States in early 2015 to caddy for Choi.

Not only was there black ribbons aplenty at the Dubai Desert Classic today but the flag is sure to be at half-mast at Pumpherton Golf Club in Livingston where Renwick had been a life member.