Seasoned Canberra professional Matt Millar played an impressive 44 pro-ams for the 2012 season and made all those kilometres travelled worth the effort by taking out the 2012 Piranha Order of Merit for the NSW/ACT region.

Millar duelled with former NSW Open champion Brad McIntosh for most of the season, before finishing with earnings of just under $50,000, earning a $15,000 cash bonus for topping the OOM. 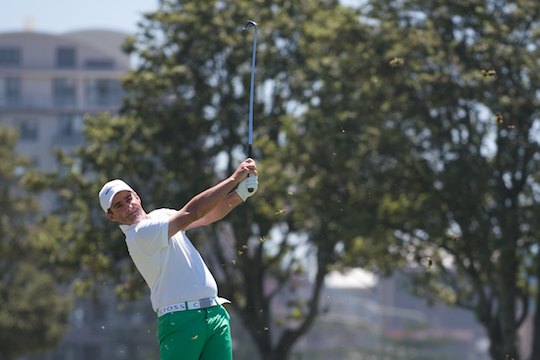 Millar won six of the 44 events he contested and averaged seven points per round, improving markedly on his 2011 effort when he finished in seventh spot.

Millar, who has contested one British Open, made no secret of the fact he intended using his cash bonus from Piranha Golf to help fund a trip to Qualifying School for the lucrative Japan Golf Tour.

“I was really lucky that Brad [McIntosh] didn’t take advantage at the two events that were on while I was away playing the Perth International in Western Australia.”

“As it turned out that meant I had a 20-point buffer with six rounds to go.”

Millar paid tribute to Piranha Golf’s Antonio Gelonisi for his sponsorship and commitment to the PGA, along with all the golf clubs that had participated on the NSW/ACT Pro-Am Circuit.”

Executive officer of the NSW/ACT division of the PGA of Australia David Barker agreed.

“On behalf of Piranha Golf and the PGA of Australia I congratulate Matthew on his outstanding season and winning the 2012 Order of Merit,” Barker said.

“I also want to thank Piranha Golf for their ongoing sponsorship of our Pro-Am Circuit and for their support of up-and-coming Tour professionals.”

“As we have seen with Matt, Piranha’s contribution goes a long way to helping develop their careers.”