It was a family affair with enough golfing remedies that even Tiger Woods would yearn for.

There was no less than 218 years of golf coaching skills available yet, amazingly, I still walked away with a slice. 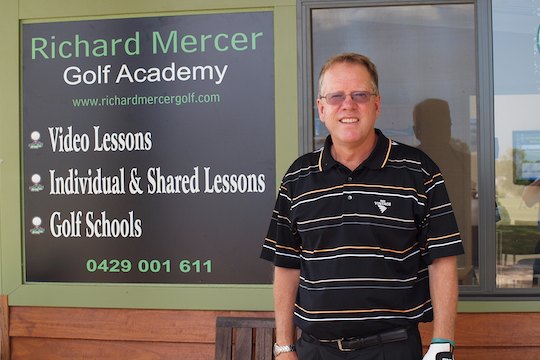 But Alex, David and Richard Mercer were not there to cure anyone’s swing faults – not yet anyway. No, the famous Mercer clan gathered for the opening of the Richard Mercer Golf Academy at The Vintage Golf Club last month.

Between them, these men have taught the likes of Steve Elkington, Peter O’Malley, Brendan Jones, Scott Gardiner and so many others who have made it onto golf’s ‘big show’.

Mind you, the man who most wanted to be there, ‘Uncle’ Kel Nagle was disappointed when he had had to miss the opening of the academy due to his ongoing health problems.

Kel was desperate to be there to square the ledger after Richard deputised for him in the United States a couple of years ago when he was elevated to the World Golf Hall of Fame.

Richard has become the Hunter Valley’s No 1 coach since moving from Sydney and when he was appointed director of instruction for The Vintage and decided to build a home beside the third fairway, they knew he was there to stay.

And after some prodding from Mercer himself, they agreed to build him what will become the Hunter Valley’s premier golf academy.

His CV is second to none and there are few things in golf that Mercer has not turned his hand to – including a long stint on tour in his 33 years as a professional.

“I played in one and half British Opens too,” grinned the man who has three times been nominated for the New South Wales instructor of the year.

“But this is certainly one of the most exciting times in my life.

“Owners of The Vintage, Don Panoz and John Stevens have shown plenty of faith in me and although I admit I pushed them to build this academy everything is coming together now with the right equipment and the best teaching aids in the world.”

Mercer is quick to point out that, like his father David and Uncle Alex, he has always been a “traditionalist” when it came to his coaching methods.

“But now I can offer the ultimate in video analysis, including the Dartfish video teaching aid along with the revolutionary and unique Flight Scope launch monitor.

“This device was originally developed as a tracking mechanism to warn battleships of incoming guided missiles.

“Luckily the South African guy who created this was a golf fanatic and he quickly applied the intelligence of this mechanism towards his great passion, golf.”

Richard said the new golf academy would allow students to hit shots from inside the academy directly out onto the driving range while being monitored by front and back videos.

So there would no longer be telephone calls from those who have booked a lesson backing out because of rain or any bad weather. Now they can just take it all inside and learn in relative comfort.

Richard cannot wait to get some of his own students there for coaching.

Among them are the 2009-2010 Sunshine Tour order of merit champion Sam Brazel.

“Sam just won four events in a row up there in Queensland and that has never been done before. Not even Greg Norman was able to do that,” Mercer said.

“I feel his effort deserves special mention because 18 months ago Sam tragically lost his girlfriend when she contracted viral meningitis while on an overseas holiday.

“For a while there he wanted to give the game up completely so to come back and do what his done shows he’s really a special talent.

“I also have another young up and comer named Troy McDonald who is also coming along really well.

“You can look for both of these boys to make an impact this summer.”

Of course Richard himself qualified for all four rounds of the British Open in 1984 – that famous year when Seve Ballesteros’ fist pump won the world over with his magnificent victory at the Home of Golf, St Andrews.

Besides being coach and instructor of many past and present Tour professionals and US university athletes, Richard has also been a great “ladies man”, instructing at least two NSW women’s amateur champions.

Richard has also been involved with the following:

Still its fair to say the main focus of Richard Mercer’s professional teaching career has been to increase the enjoyment of golfers through his instruction programs focusing on keeping golf simple.

Its well known that Richard is a third-generation member of the Mercer golf dynasty, renowned as one of Australia’s greatest golfing families.

Richard completed his apprenticeship under his father, renowned PGA professional and instructor David Mercer, who retired from Killara Golf Club after 43 years.

Another great influence on Richard Mercer’s teaching career has been his uncle, Alex Mercer, who has coached Steve Elkington and Peter O’Malley.

He has also been greatly influenced by close family friend and British Open champion, Kel Nagle, whom Richard represented at the 2007 World Golf Hall of Fame Induction in St. Augustine, Florida.

“If Dad (David), Uncle Alex and I could putt like Kel we might have been world beaters too,” grins Richard.

And for anyone unfamiliar with The Vintage, which hosts the NSW Open Championship each year, it is a spectacular 18-hole Greg Norman-designed golf course created specifically to complement the area’s unique natural environment and prestigious Hunter Valley lifestyle.

Certainly The Vintage ranks among the best golf courses in Australia and has recently received accolades from some respected golfing publications.

The Vintage golf course can be regarded as a game of two nines.

The opening holes are tight and twisty, demanding careful route plotting with an iron often the best weapon of choice from the tee.

The back nine has more resort-style ‘feel’ to it, with plenty of space – and plenty of Norman’s trademark bunkering on the closing holes.

The Vintage boasts one of the best driving ranges in NSW, complimented by a practice chipping area, putting green and Richard Mercer golf academy.

The outstanding facilities don’t stop there – The Vintage clubhouse is the focal point of the community.

With superb locker facilities, a fully-stocked pro shop, cafe and The Legends Grill restaurant, the award-winning clubhouse provides a haven for residents, golfers and guests alike to relax over a glass of wine overlooking the stunning panorama of the golf course.

The Vintage has a complete range of Hunter Valley accommodation in the heart of the vineyard district.

Chateau Elan offers a selection of luxurious spa suites, king rooms and spa villas, all with great views over the championship golf course and mountains.

You can also enjoy the lavish four and a half star resort style living at The Grand Mercure Apartments, with all the delights of the Hunter Valley at your door.