Jim Mackay will be competing at this year’s British Open but not on the bag of his long-time friend Phil Mickelson.

Yet ‘Bones’, as he is affectionately known through the golf world, will be there competing to attract viewers to the coverage of the event most rate as the best event in world golf. 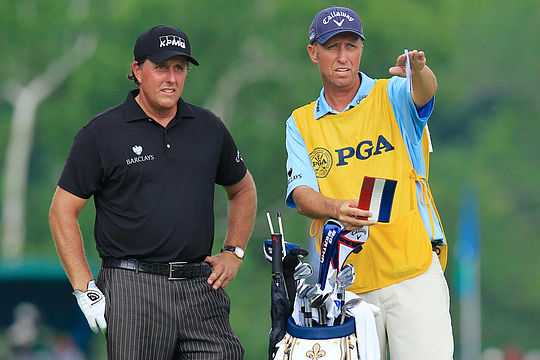 Mackay last week signed a contract to work as an on-course reporter at the Open Championship at Royal Birkdale next week.

And if his ‘trial run’ during the recent RSM Classic on Sea Island is anything to go by, Bones is a natural.

NBC’s lead producer Tommy Roy was blown away by Bones’ as an on-air talent:

Roy makes no secret of the fact he feels Mackay possessed two of the most important qualities to be a great broadcaster: he was a strong, smart communicator and a big-picture thinker.

Roy said the conversations with Bones were rarely about he and Mickelson and their little, myopic world.

“It was always bigger picture, and the storylines that were happening in the event,” Roy said.

“Bones thinks like a producer. Those things usually take time to get ingrained in you, and he already has that.”

While Mackay could rightly be recognised as one of the world’s most identifiable caddies, he certainly breaks the mould in golf broadcasting as he is the first caddie to be used in a full-time tournament role.

Mackay himself is thrilled by the opportunity as the 52-year-old will not only work on the Open but continue through the rest of the year through to the FedEx Cup playoffs as well as the Presidents Cup.

He will also be employed to work a full schedule of about 20 events in 2018.

“This is a great day for me,” said Mackay. “I’m absolutely overjoyed.”

Let’s hope Mickelson doesn’t use the ‘old mates’ act’ and call on Bones for some looping duty if and when the pair both show up for business at the Presidents Cup.