Indooroopilly had 60 per cent and 22 holes of its 130 hectares on the Brisbane River inundated during the recent flood and Durant believes it will be 12 months before the golf course will be back to its pristine pre-flood condition. 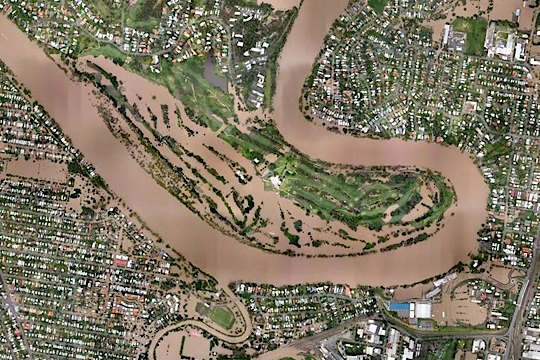 Of the many Brisbane courses damaged by the flood, Indooroopilly was by far the worst affected.

Nearby Brisbane Golf Club was also swamped, but unlike Indooroopilly the floodwaters quickly subsided, causing damage from mainly silt and mud. McLeod and Jindalee golf clubs were inundated also, with the clubhouse at Jindalee party submerged.

However the highly-rated Indooroopilly course, which boasts an 18-hole member’s layout (west course) and another 18 holes (east course) which is primarily played by visitors, was literally hammered.

Every fairway and every green on the west course, except one, went under. The third fairway was covered in almost one metre of river sand.

“I have no idea how much it will cost to get this course back to where it was before the flood, but I’d suggest a minimum of $1 million would be near the mark,” said Durant who has been at Indooroopilly for 15 years.

“Of the 36 holes on the course, 22 were under water and consequently mud. Almost every tee and every green on the course has incurred damage of some degree.

“I have never seen anything like this in my time here and, sadly, prior the flood I believe the course was in the best condition ever.”

Durant said club members, as well as members of the public, had been outstanding in immediately jumping to the assistance of the club, but once the clean-up was done repair work needed to be carried out by experts.

“We hope to have 11 holes on the east course ready for play by early February and the west course back in operation by mid-March,” he said.

“But to have this course back in the condition it was will take a super-human effort, more than a million dollars and on-going ideal weather.”

Brisbane Golf Club’s head teaching pro, Murray Lott, predicts that with favourable conditions the Yeronga course should be back to normal by early March.

The club’s machinery shed was demolished in the floods, but most of the machinery was moved to higher ground and saved. The clubhouse and pro shop were also out of harm’s way.

“Ninety per cent of the course was flooded. Every hole and every green except the 10th and 11th fairways, and four greens, have had water over them,” said Lott, a nine year Brisbane Golf Club employee.

“A semi-trailer floated in from a nearby transport company and sat on the sixth fairway until the water subsided and heavy machinery could get in to move it. Like everyone else affected by the floods, this has been catastrophic for our club.”

Golf Queensland reports that many golf clubs in south-east Queensland have been adversely affected by either the floods or the torrential rain of recent months.