Moonah Links is on the market

Buying a golf course is cheaper than buying a plane or even a big boat these days, according to property magnate Max Beck.

So one of Australia’s richest men (valued at $390m) has put in a bid to buy the prestigious Moonah Links, on Victoria’s Mornington Peninsula. 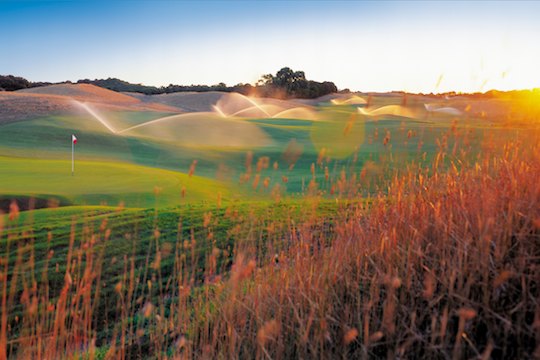 Neighbouring golf resort, The Sands Torquay, which boasts a Stuart Appleby-designed layout has also been put on the market.

Market estimates for the two golf resorts suggest Moonah Links may be worth between $10 million and $15 million while The Sands might be priced as high as $20 million.

Set on 238 hectares, Moonah Links comprises the Legends course and the Open course, while the golf estate includes an 88-room Peppers hotel and conference centre.

A 250-dwelling residential development is almost sold out while there is also a 280 condominium project included in the estate.

Handbury acquired Moonah Links in 2004 at a time when he was also developing The Sands, which is set near the popular surf resort of Torquay, on Victoria’s south-west coast.

That resort includes a 112-room Peppers hotel, while The Sands residential estate, with 400 homes and 150 townhouses, surrounds the resort.

There is another 4000-square-metre parcel of development land opposite the resort.

Moonah Links is nestled in the heart of the Mornington Peninsula food and wine district, close to the popular seaside resort of Portsea.