Construction began last week on an exciting new golf course in Tasmania, this time at Cape Wickham on the northern coast of King Island.

The course is being designed by American golf architect Mike DeVries and will be built by Victorian golf course builders TURNPOINT. 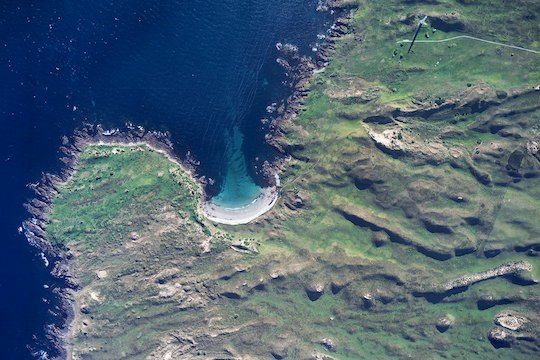 The 18-hole layout at Cape Wickham will occupy an incredible seaside property in the shadows of Australia’s tallest lighthouse.

Among other natural attributes, the site includes a north-facing beach known as Victoria Cove, a dramatic rocky headland called Cape Farewell and some of the tallest sand dune structures in golf.

Sea views are constant throughout the round and the 150-foot Cape Wickham lighthouse dominates both the closing stretch of holes as well as the view from the clubhouse and lodge precinct.

Architect DeVries, who describes the site as the ‘best he’s seen, anywhere in the world’, has relocated his family to the small island to personally oversee construction of the golf holes.

His routing includes 8 holes directly along the coast and another two that end with greens pressed back against the shoreline.

Unusually for a coastal property like this, the inland holes are equally dramatic and blessed with the most interesting ground undulations on the property along with stunning views of Bass Strait and the Lighthouse.

“The combination of the Cape Farewell headland, Victoria Cove, Cape Wickham Lighthouse, views to ocean and shorelines, as well as the prospect of direct golfer interaction with the water makes this the most amazing site I have witnessed, existing or imagined,” says DeVries.

King Island is located in Bass Strait, midway between Melbourne and the northwest coast of Tasmania.

It’s also a surfer’s paradise, with perfect year-round conditions and one break, at Martha Lavinia beach, ranked among the finest in the world.

For golfers too, the existing King Island Golf & Bowling Club in Currie is regularly listed among Australia’s best 9-hole courses.

Access onto the island is by plane, from either Tullamarine or Moorabbin airports in Melbourne, or from Launceston and Burnie airports in Tasmania.

Construction of the golf course at Cape Wickham is expected to be completed sometime in 2014.