Despite the actual golf club going into receivership recently, The ‘Range at Robina’ continues to grow, with the Pure Balance Golf Academy insisting it’s ‘business as usual’ since basing themselves there in February this year.

In a few short months, The Range has established itself as one of the most exciting teaching facilities in South-East Queensland. 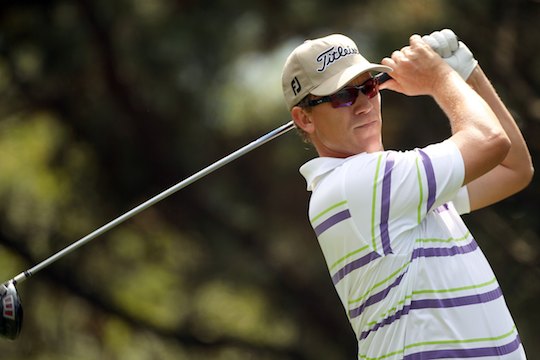 Ryan Haller: One of the A-Grade students to come out of The Range

The professional staff at The Range are headed by British-born teaching professional, Kevin Healey, and current One Asia tour pro, Peter Shaw.

They are joined by the experienced Bob Gould and Todd O’Leary and have a host of current tour players, rising amateurs and keen golfers eager to improve their games at work on the range.

“We were keen to establish the Range as one of tour quality where anyone can come to improve their game, not simply the Golf Club members,” said Shaw.

“We have brought in high quality balls, the latest video and launch monitor club fitting technology and most importantly, brought back practicing from grass, which has been a boon for the popularity of the range amongst members and students. Mats are still available under cover for practice in more inclement weather.”

Healey’s coaching resume is one of the most impressive in Australia, having coached at the Jack Nicklaus Golf School in the UK before moving to Australia in 2000.

An Advanced Fellow member of the British PGA, Healey worked closely with acclaimed teacher Gary Edwin for many years before moving to Hope Island, ahead of the current move to Robina.

Healey also coaches exciting young Thai prospect, Atiwit Janewattananond (‘Jazz’), who was the youngest player at 14 years and 72 days old to make the cut in an Asian Tour International event in Thailand.

At only 15 years of age, he is regarded as one of the most exciting talents in Asian golf. Richly talented Queensland amateur Rika Batibasaga is another regularly on site honing his game under Healey at Robina.

Karl Morris, the current mind coach to Lee Westwood, Graeme McDowell and Open Champion Louis Oosthuizen, is glowing in his praise of Healey’s talents, calling him one of the standout coaches in the world of golf.

“Kevin is one of the best teachers in the country, ranked at a higher level than the Level 3 rating in the Australian PGA,” said Morris.

Shaw said Healey was on a first name basis and highly regarded by people like Morris and Ramsay McMaster, who are working with some of the world’s best including some of the current Major Champions.

Shaw himself continues to focus on tournaments on the Australian tour and in Asia and some of his biggest successes included winning the individual section of Australia’s richest pro-am, the 2009 Sydney Meriton Invitational, as well as the Toyota Southern Classic on the Von Nida Tour in 2000.

A recent addition to The Range coaching stable is Matthew Rogers, who will coach at the Academy on a part-time basis. Rogers will split his time with his regular students at Mt Gravatt in Brisbane and at the Range a number of days a week.

He went on to make the cut at Coolum, the only vocational PGA member to do so, and finished the championship ahead of such luminaries as Craig Parry, Bradley Hughes and Aron Price.

The Academy’s mix of such well credentialed coaches, including current players in Shaw and Rogers, is unique and adds even great credibility to their operation.

The Academy offers a range of packages, including a free swing analysis, that include single sessions and playing lessons. Healey also provides internet lessons for players who are local, interstate or overseas and is able to provide players with their lessons as an iPhone application, to allow them to review their lesson wherever they are.

“We are able to do club fitting and price matching for equipment at The Range, which not many people know about at the moment,” said Shaw.

“We have both Titleist and Callaway fitting carts and equipment available and are able to provide a launch monitor service to equip players with the right fit and mix of clubs for their abilities.

“Having one of the best short game practice areas on the Coast at The Range is also a great advantage, plus we can provide playing lessons on what I rate as one of the top three courses in the area as well. Robina Woods’s course conditioning is always first rate and the range conditions are maintained at the same standards.

“With such a good group of professionals, there is always someone available to help people with whatever they need seven days per week.”

Details on the Pure Balance Golf Academy are available at www.purebalancegolfacademy.com.au