And The Great White Shark himself is part of a launch to attract investors to the project. 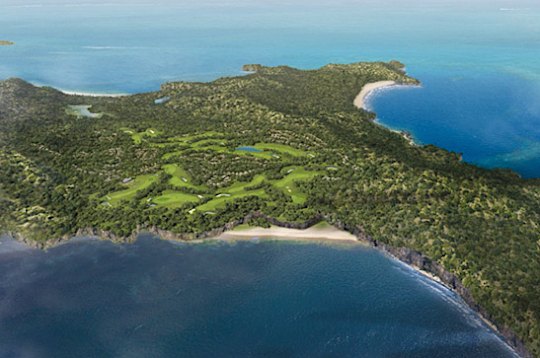 Norman is involved as an ambassador for the Tower Holdings’ plan to redevelop the island.

The exciting plans include building 700 villas, 350 apartments, a beachfront hotel, airstrip and a retail village.

Still that it is a “scaled-down” version of two earlier proposals, one rejected by the state Labor government in 2006 and another by the Federal Government in 2009.

That proposal included plans of building three hotels with 700 rooms.

“Australia has lost a little of its panache in our international tourism market,” explained Norman at the launch.

“This project is important for Australia, for our locals and for attracting luxury visitors back to Australia.”

It was a Sydney developer, Terry Agnew, who led the seven-year bid for government approval for the redevelopment, which finally received the green light from the State Government in March last year.

Yet the new plan includes at least 96 conditions, including requirements for peer-reviewed management plans over the development’s impact on marine species and coral on the Great Barrier Reef.

Great Keppel Island’s existing resort will be demolished and the new project developed over 12 years.

Queensland Tourism Industry Council chief executive Daniel Gschwind said there had not been a development of this scale in the state for at least 25 years.

Great Keppel Island closed in 2008 after 40 years of operation.