Is there anything more Australian than Uluru? And is there any greater Aussie golf icons than Greg Norman?

So it does sound like the perfect partnership when The Great White Shark aka Norman declares he wants to build a golf course at the foot of Uluru. 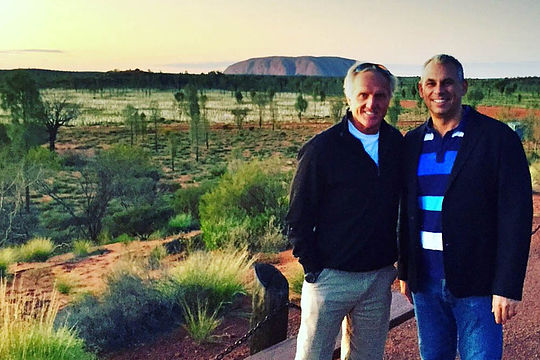 Reports state that Norman has already mapped out plans for a course after a visit to Ayers Rock with Northern Territory Chief Minister Adam Giles.

“On my invitation Greg came to the Northern Territory to look at what sporting and economic investments he could make in the Territory,” Giles said.

“Yulara and Uluru was one particular visit, we will see what will come of that.”

Norman reportedly met with the operators of the Ayers Rock Resort and has already begun drawing up some rough plans.

An ‘Uluru course’ is one of two Norman is believed to be proposing for the Northern Territory with the other, on Government land near the Territory Wildlife Park, about 60km outside of Darwin.

“I know that Greg’s been fortunate enough to build a golf course at the foot of the pyramids in Egypt,” said Giles.

“Wouldn’t it be fantastic to see, as an additional opportunity, not just having a resort and cultural opportunities at Uluru, but also the chance to have a shot of golf.”

Latest reports indicated Norman was poised to sign a heads of agreement with the NT Government about the Top End development.

According to the Chief Minister any investment that could grow tourism and employment opportunities for indigenous Australians was welcome.