For sale – the gleaming Masters trophy won by Arnold Palmer. 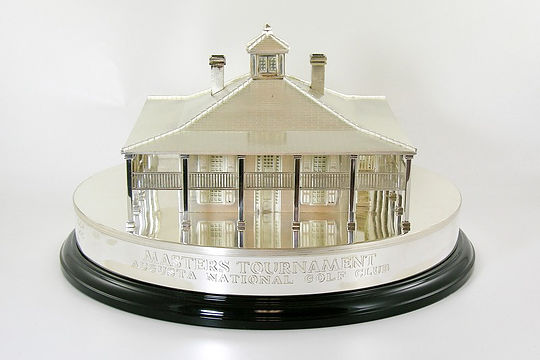 The trophy is 13.5″ wide, 6.5″ tall, and weighs 20 pounds. It wasn’t given out until 1993, but the tournament decided to present the trophies retroactively to all of the event’s winners.

The website – www.greenjacketauctions.com – is hosting the sale of the trophy and refers to the gleaming trophy as a “Dream Piece” – an item so rare and desirable that the thought of actually owning it could only occur “in a dream.”

The story of how the trophy reached this auction block is both extraordinary, yet unsurprising. Arnold Palmer Enterprises still owns Mr. Palmer’s other three Masters Tournament trophies.

This 4th trophy was intended to be part of an ambitious golf museum on the East Coast of the United States. When the financial crises hit the U.S. economy, plans for the museum were abandoned and everything was liquidated. This was the crown jewel of the museum’s collection.

Palmer received four such trophies for his victories in 1958, 1960, 1962 and 1964. All four have his name, those years, and his winning score engraved on them. According to Green Jacket Auctions, the trophy up for auction was originally intended to be displayed in a golf museum that never was never built, and that Arnold Palmer enterprises owns the other three trophies.

This sterling silver on wood base “clubhouse” trophy measures 13.5″ wide by 6.5″ tall, and weighs 20 pounds. The front of the trophy is engraved “Masters Tournament, Augusta National Golf Club.” The side is engraved “Arnold Palmer” and the dates of his victories. Arnold Palmer’s other Masters Trophies are substantially identical to this trophy – allowing for differences in placement and styling of engraving on the band.

This trophy comes with a substantial amount of provenance:

In the golf collecting world, this trophy has few rivals in terms of value and appeal. For modern memorabilia, only Horton’s Smith record-setting Green Jacket (sold in Green Jacket Auctions’ Summer 2013 Auction for $682,229) may be considered superior; though we imagine many would even argue that point.

Bidding for Palmer’s Masters trophy, which Green Jacket Auctions describes as a “dream piece,” is open until Dec. 10. The company estimates it will fetch $250,000-plus.