Patricia Bridges OBE passes away at 95

Women’s golf in this country suffered a body blow last week with the passing of the grand lady of amateur golf in Australia, Mrs Patricia Bridges OBE.

It will make this year’s Women’s Open Championship even more special when some of the best players in the world vie for the Patricia Bridges Bowl, named after a woman who devoted most of her life to the sport. 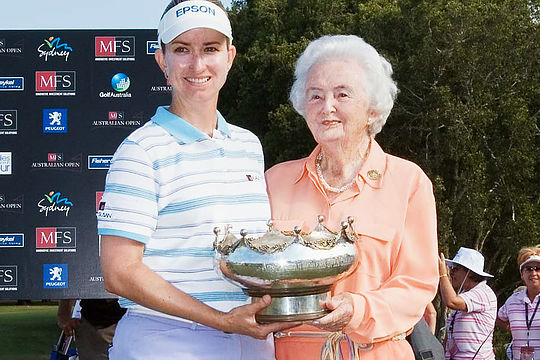 Mrs Bridges was 95 and died peacefully in Sydney, leaving a void that will probably never be completely filled.

She began a life-long love affair with golf when she began playing at the Delegate Golf Club in far south NSW after being introduced to the game by her brother-in-law.

That was appropriate as Mrs Bridges became a ‘delegate’ to so many areas of the women’s golf game over the years.

That began when her abilities as an administrator began to shine in the early 1950s when she became secretary-treasurer of the Far South Coast and Tablelands Golf Association.

From there she was elected to the New South Wales Golf Union in 1956 – a position she cherished and that would help shape her life.

She was a member at the Bowral Golf Club from 1961-74, during which time she won the 1973 associates championship.

As her administrative portfolio grew, she retired from the club to focus her golfing energies, and was first appointed to the Australian Ladies’ Golf Union in 1964 and became an Australian selector in 1969.

Her ability to co-ordinate those around her with ease and grace was widely recognised within sporting and business communities.

She was president of the NSWGU, where she was later made a life member in 1984.

She later joined the Royal Sydney Golf Club where she remained a member even when her health no longer permitted her regular patronage.

In 1981, Mrs Bridges was awarded the OBE for “Services to golf and the community”.

It didn’t stop there, in 1991, she was elected for a third term as ALGU president.

In 1994, she was appointed chairman of the women’s committee of the World Amateur Golf Council, a position she held until 2000, and became the first Australian to hold an executive position on an international golf committee.