At the age of 101, former World War II hero Dan Cullen has passed away recently after a short illness. 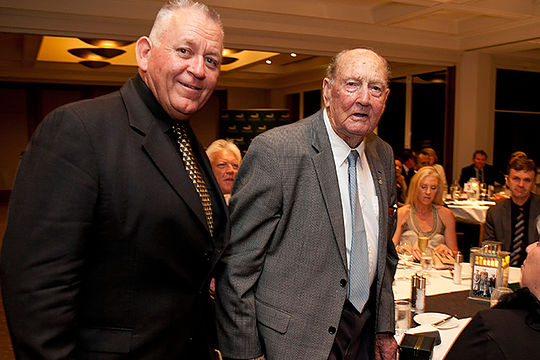 A life member of the Australian PGA, Cullen played marvellous golf until well into his 90s, broke his age almost every time he teed it up and was often feted as the oldest active player to qualify for a British Open championship at the age of 64.

Born in Bunbury Western Australia in 1914, Cullen held a well-earned reputation as a respected club professional and fine golfer.

He once sat alongside German Bernhard Langer at an official PGA dinner and when Langer asked him if he had ever been to Germany, Dan’s answer, almost in a whisper, was “yes, but only at night.”

The truth is Cullen flew a remarkable 32 missions aboard Lancaster bombers over Germany during World War II and lived to tell the tale. He received a Distinguished Flying Cross (DFC) for his efforts.

Cullen joined the PGA in 1932 after completing his traineeship at the Western Australian Golf Club under the guidance of club professional, Eric Alberts, before moving to Cottesloe Golf Club.

In 1937 and 1938 Cullen won the West Australian Open and following this in 1939 defeated South African Bobby Locke in an exhibition game at Royal Perth Golf Club.

Cullen credited Locke, one of South Africa’s most successful professional golfers, for developing his career as a pro.

In 1945, Cullen was appointed club professional at Sydney’s Roseville Golf Club before moving on to St Michael’s Golf Club in Sydney’s eastern suburbs.

In 1977 at the age of 64 Cullen qualified for The Open, the oldest qualifier in the tournament’s history, and teed off in a field alongside Jack Nicklaus, Seve Ballesteros, Gary Player, Tom Watson, Graham Marsh and another popular Aussie Bob Shearer.

Cullen taught the game of golf to thousands through Cullen’s Driving Range, which he operated for many years alongside St Michaels GC from the late 1960s.

“This is a sad day for the PGA and the golf industry, we’ve lost a doyen of the game and our membership,” said chief executive officer of the PGA of Australia. Brian Thorburn.

“Dan contributed greatly to the sport of golf as both a club and tournament professional, not to mention his bravery and heroics during World War II.

“He will be sadly missed and our thoughts and sympathies are with the Cullen family.”