The tragic Black Saturday bushfires in Victoria two years ago scarred the state emotionally and physically.

The healing process will take years for some and may never be completed for those who lost loved ones. 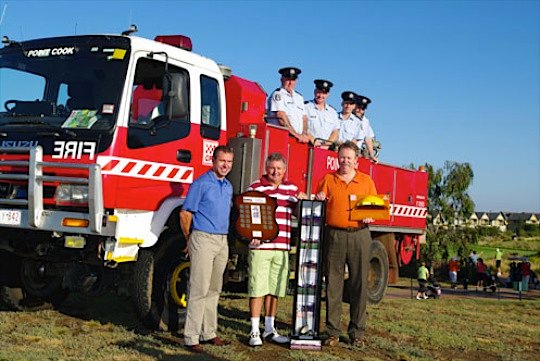 However, many Australians who rallied to help those affected forged strong bonds with those they offered to help.

In some cases people not known to each other before that tragic day, have now become friends for life.

There are numerous examples, too, of the wider golf family supporting its members.

A case in point is the friendship which has now been forged between members at the Greg Norman-designed Sanctuary Lakes in Melbourne’s west and country club Horsham.

Sanctuary Lakes’ George Begg explained: “Following the disastrous Black Saturday bushfires of 2009 which burnt out the clubhouse at the Horsham Golf Club the bond between the members of the Sanctuary Lakes and Horsham has become strong. It began with Sanctuary Lakes hosting a Fire Appeal Day after the fires in 2009.”

It blossomed to such an extent that the two clubs now play each other annually for the Phoenix Trophy – a charred three metalwood that was salvaged out of the ashes of the burnt out Horsham clubhouse.

Recently on the anniversary of the fires, 20 members of Sanctuary Lakes who held the Phoenix Trophy after the first playing of the event in 2010, journeyed to Horsham in an effort to retain the trophy. But the trip was in vain.

The city slickers were pipped by their country hosts in a nail biter – 29.93 average stableford points to 29.65.

Horsham’s Joan Williams had the best score for the ladies with Cathy McGilp the best for Sanctuary Lakes.

Brian Thomas President of Horsham said that it was a great thing for the two clubs to be united in this way but he was still sad that it had to take a tragedy to do it.

His counterpart from Sanctuary Lakes Noel Caulfield said that it was pleasing to see the two clubs have a spirit of competition, but he too was sad that it had to come about through the loss of Horsham’s clubhouse by fire.

The next playing of the Phoenix Trophy will be at Sanctuary Lakes in February 2012.