It’s almost a decade and a half since the introduction of both the iPhone and we still have no official golf handicap app in the Australian market.

And the highly-rated one that we did have, Handy Cap, has now been forced to shut down by Golf Australia. 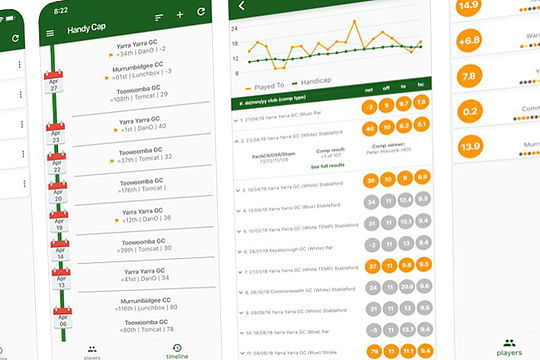 The popular, 5-star free app, which was launched back in 2015 by Melbourne-based golfer Bradley Hohn, is longer working after talks between the governing body and the app developer broke down.

Golf Australia has indicated it can do the job itself and for less money, which given the history of almost every app ever developed seems doubtful.

“First and foremost Golf Australia apologises [for the app closing down]. What it boiled down to was the commercial negotiation between the owner of Handy Cap and Golf Australia,” said Mark Hayes, Golf Australia’s Media Manager, on the latest Inside The Ropes podcast.

“The negotiation went in good spirits, it was well done. If I’m being absolutely fair dinkum with you here, which I need to be because we are getting pole-axed for shutting down this app…we tried our best to keep it up and about.”

“The price difference between what we can build an app for, and what was being asked by the owner of the app were so far apart that it made no commercial sense to do it.”

“It would be remiss of me to say we didn’t leave any stone unturned but you have to come to a point as some stage and we reached that point.”

Many of the best apps for services are made by self-motivated one-person shops with a passion for their product. You only have to look at the difference between the first and third-party Twitter and Reddit clients for prime examples of this.

While official apps are often mired with bureaucracy and ego issues, independently developed apps, and especially free ones, tend to grow organically and are built with the end-user in mind.

Also not seemingly factored into the financial conversation is the five years of incremental updates already baked into the Handy Cap app. Any new app from GA, or anyone for that matter, faces a long road ahead filled with interface tweaks, bug fixes and OS updates along with staff’s extra time spent on managing project…and those aren’t free.

It’s a shame that a developer who has put years of hard work into polishing the app into something very useful is walking away with nothing so let’s hope it hasn’t all be in vain and GA can pull off a miracle…watch this space.