As a Queenslander, it was hard to watch January’s extraordinary floods that engulfed so much of the state and left a trail of destruction and tragedy in its wake.

Among the thousands of Queensland residents and businesses that have been affected, golf clubs were among them. In the hours after the wave of water hit Toowoomba, we received photos of Toowoomba City Golf Club – with a surging new river replacing the creek that usually runs through the middle of the course. 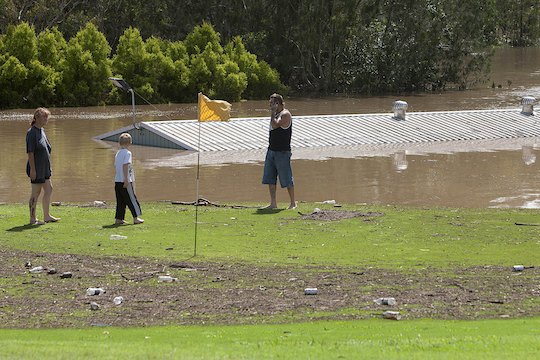 Toowoomba lost pedestrian bridges and their course irrigation system after a vehicle was carried through the torrent and across the course.

At the time of writing we are aware that Indooroopilly, Brisbane, St Lucia, McLeod, Corinda and Oxley Golf Clubs were among many more to be affected by the rising tide in Brisbane. It is likely that a number of other clubs have been damaged by the floods that have now affected 75% of the state.

As more and more news of damage came through, the spirit and compassion of the Australian golf community rose to the top. Our office received numerous phone calls from club members and other individuals looking to either donate to the Relief Fund or work out ways that their club could help the affected clubs in Queensland.

It’s a part of our industry that we should be immensely proud of. As during the 2009 bushfires in Victoria, golfers and golf clubs around Australia were lining up to assist. And just like in 2009 Golf Australia and the other industry bodies have set up a Golf Industry Flood Relief Fund to assist the people and golf clubs impacted by the floods.

Above and beyond the human toll and the massive damage to property, a number of courses will need significant recovery work to repair damage and equipment destroyed by the floods. As golfers, we all know and understand the vital role golf clubs play in their local communities.

When these clubs are damaged or cut off as many were in Brisbane and around Queensland, it is heartening to see people locally and nationally wanting to offer their assistance, whether it be financial or by other means. We are very lucky to work and play golf in an industry has such a strong community focus and desire to help in difficult times.

In natural disasters golf clubs often become a place of refuge, to get news and for communities to look after each other and work out how to respond. It’s a safe and familiar environment for many as plans for recovery are made.

Following the inundation at Ipswich, Ipswich Golf Club set itself up as one of the evacuation centres for thousands of residents left without access to their homes and we have no doubt many more clubs and individuals did and are still doing everything they can to help those affected.

Queensland will rebound from this disaster, just as it did in 1974 and as Victoria did in 2009 after the fires. Clubs will play a vital role in that recovery through a variety of activities including fundraising golf days and assisting members of their local community in rebuilding homes and lives.

By the time you read this, Golf Australia will have run the 2011 ISPS Handa Women’s Australian Open at Commonwealth Golf Club in Melbourne. The championship is a celebration of women’s golf in Australia with an elite field, including World number one, Korean Jiyai Shin.

It will be a wonderful championship and let’s hope a Queensland resident like Karrie Webb or Katherine Hull might lift the trophy after one of the most challenging months for the Sunshine State.