Ray chalks up 50 years at Strathfield

1961 was a big year. Gary Player became the first non-American to win the US masters, breaking the title stronghold of Arnold Palmer.

The Beatles performed for the very first time at the Cavern Club in Liverpool. 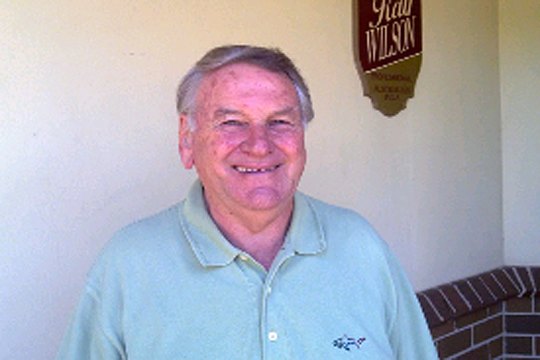 And, at Strathfield Golf Club in Sydney, Ray Wilson started work as a trainee professional.

This year Gary Player was invited back to Augusta to celebrate the 50th anniversary of his first Masters win.

Ray Wilson won’t be invited back to Strathfield. He doesn’t have to be, because he never left.

For all of those last 50 years, Ray has been there, through rain, hail and shine guiding the Strathfield members around the course.

“I know a lot of pros don’t socialise with the members, and I can understand that but I’ve become very close to many of the players here,” he said.

“You spend so much time together it’s only natural to become friends off the course.”

Wilson is a very familiar figure in Strathfield. The father of four has been a tireless community worker, and was last year named as Strathfield Citizen of the Year. You’d have to wonder where he finds the time.

“I sometimes ponder what it would be like to have Sunday mornings at home….you know, read a paper – I’ve never done it, but you can’t complain. My wife puts up with it, although when the four kids were at school she’d spend Saturdays driving all over town trying to manage their Saturday sport alone.”

“It comes with the job. So do the early starts. You come to work at 5.30am, pitch black. But the hours never worried me. And I can say in 50 years, I’ve never, ever, been late. I’m always early,” said Ray.

“And I’ve never woken up and not wanted to come to work.”

Which is even more amazing when you consider that Ray has had to answer to 42 different committees during his time as club professional at Strathfield. And club politics can be tricky for the club professionals at the best of times.

“There are always a few issues. A lot of committee members don’t know anything about golf. They’ve never run a pro shop. They’re not aware of what happens. But you just have to adapt to each new one,” says Ray.

Wilson has had to adapt in other ways too. He is deaf in his left ear and 85% impaired in his right ear, and has been for years.

“I do have bad balance and struggle in the shop sometimes. People think you’re drunk. But at the same time, the doctors are staggered at my hand-eye co-ordination. I tell them when you’ve been swinging a golf club all you life you get pretty good at it!”