If the Sanctuary Cove of old was a golfing heaven, it’s now reached even loftier heights.

More than 2500 corporate bookings were taken by the golf club before its scheduled opening in April. 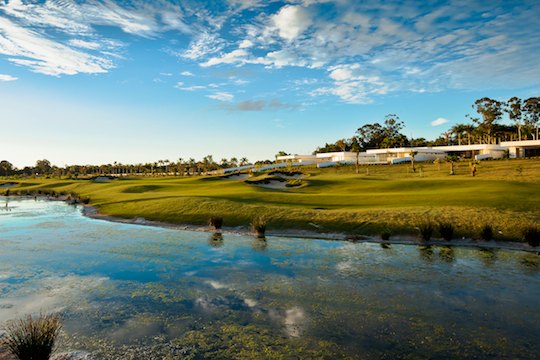 “We’ve been overwhelmed with the number of golfers wanting to play on the reconfigured Palms,” said Sanctuary Cove Golf and Country Club general manager Stephen Turner.

“But the numbers will be restricted to corporate golfers and those staying at the Hyatt Regency Sanctuary Cove as the golf course is owned by members and will be predominantly for their use.”

The opening of the Palms was part of the ongoing transformation of Sanctuary Cove infrastructure and follows the completion of the $12 million golf club last year.

“More than $20 million has been spent on enhancing Sanctuary Cove’s golfing amenity over the last two years and this latest completion will help attract more visitors and further enhance the resort amenities for residents,” said Quinn.

Watson has designed several famous courses both across Australia and internationally, including The Royal Sydney Golf Course and Magnolia Golf Club in Japan, but said The Palms is one of his most outstanding creations.

“Living at Hope Island means I almost lived on the job when I was re-designing The Palms; I visited this job 10 times more than I would any of my previous sites,” he said.

Watson said the course is unique because of its rustic bunker style and strategic layout.

“The neighbouring Pines course is known for its length, but The Palms is deliberately shorter and requires the player to think more about where the pin is and where they need to be aiming – it’s the ‘thinking man’s’ course,” he said.

“It will be interesting to see which of the two courses members favour.”

The Palms golf course is now officially open to members.