Sandbelt chips in for struggling clubs

Eight sandbelt clubs in Melbourne joined forces on June 24 to award $77,000 to 14 country Victorian golf clubs devastated by recent floods and the 2009 bushfires.

At a presentation at Axedale Golf Club in Bendigo, cheques were awarded to the various clubs. 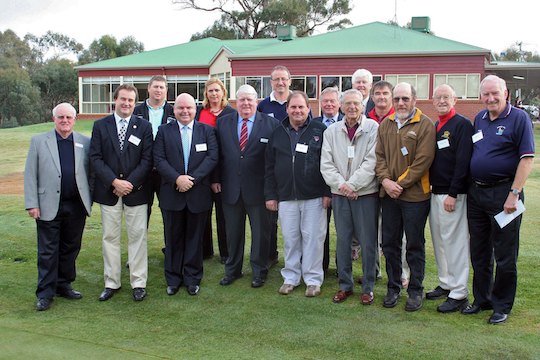 “Over the last couple of months, we’ve been working with Golf Victoria for them to tell us who the most needy are and they determine the amounts that went to 14 clubs in all,” Metropolitan General Manager Allan Shorland told Golfer Pacific.

Axedale was the leading recipient, receiving a cheque for $20,000 from the respective general managers of the Commonwealth and Metropolitan Golf Clubs – Peter Parks and Allan Shorland – who were representing the sandbelt.

Shorland said the clubs were in dire need of financial assistance.

“They don’t have any staff in their clubhouse and one and half staff on their golf course. We now see why they needed this help because they had nothing.”

Shorland said although the affected golf courses themselves eventually recovered after water had sufficiently subsided, some club facilities were damaged beyond repair.

“Most of the clubs, the damage was to equipment that was in flooded sheds and things like that and a lot of these clubs can’t afford to have insurance so they’ve gone down the drain,” Shorland said.

Irrigation systems, pump stations and fencing were also among the types of infrastructure lost.

Providing flood relief is one of many charity initiatives that the Sandbelt clubs are involved in.

“I know at Metro, we’ve got over 50 charities or community groups we help every year. Kindergartens and all sorts of things, we help them with their fundraising,” Shorland said.

“The eight Sandbelt clubs try to get together when there is an exceptional circumstance and see if we can raise some money for what we think is a really god cause and we’re really happy that this one was for golf clubs and not just the general community.”

Meanwhile, golf courses across Victoria are also eligible to apply for extra State Government funding under the Community Facility Funding Program in 2012/13.

Members from the Dunolly and Talbot golf clubs were at the funding announcement in Maryborough on July 8.

With a maximum of four upgrades afforded to selected councils, the large portion of sports clubs applying for funding will miss out.

The funding will be weighted to favour smaller councils with metro councils having to contribute 50 per cent to any upgrade, city councils 40 per cent and shire councils 33 per cent.

Delahunty said multi-sport facilities will be favoured with regional planning grants of up to $50,000 (previously $20,000) also available for selected councils.