Spread the word, Horizons is back

Having been on the precipice of extinction, over the past 8 months, hemorrhaging losses of between $15000 and $20000 per week, the future of Horizons now appears much brighter, with the newly installed lessee, currently spending $1 million, in bringing the course back, to its previous championship condition.

Although this resort course is currently under Administration, Queenslander Brett Lawton, has been granted permission to rent the business, until a Supreme Court battle with two Korean banks is settled. 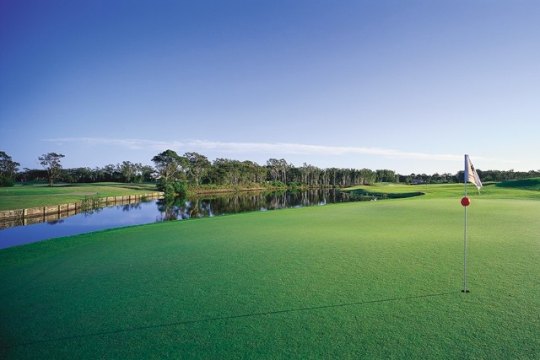 Mr Lawton has offered the administrators, PKF Chartered Accountants, over $3 million to purchase the course, a figure which the administrators were happy with, and indeed are holding in trust, however, the formal sale transfer of the course, is on ice, until the determination of The Supreme Court, for which the release of deeds were sort.

The history of the Horizons Golf Resort at Salamander Bay, in the pristine region of Port Stephens, is not dissimilar to the roller coaster rides at the Royal Easter show, which provide for the highest of highs, yet the lowest of lows as well.

The course was opened in 1992, having been designed by Graham Marsh and Ross Watson, and built on a site which was originally wetlands, but which had been damaged by the sand mining in the area.

The scenic layout resulted from extensive native revegetation, and care was taken to preserve wetland areas as a sanctuary, for native birds and animals.

Once the course was established, it quickly became know for its slick greens, hazardous waterways, and undulating fairways, and was described as a World Class Championship Course, of Domestic and International Tournament Standard.

It attracted some of the best professional players in the world over this period, having hosted the 2002 & 2003 ALPG Players Championship, the 2002 Men’s NSW Open and the 2004 Men’s ANZ Championship, which was co sanctioned by the Australasian and European men’s tours.

However, the lows points in the resorts history have been just as dramatic. In 2003, the resort was owned by a Sydney accountant, who subsequently went into receivership.

As a result, the Korean construction company known as Le Meilleur, bought the resort course for $7 million in 2004. However, they subsequently went into voluntary administration in June 2010, with debts totaling more than $17 million.

Enter Mr Brett Lawton. A determined Queenslander, who oozes enthusiasm and optimism, in his pursuit of his latest golf course venture.

Lawton started in the industry 21 years ago, running a goat track, and now has one of the best courses in Australia, that being Sandy Gallop Golf Club in Ipswich, and is confident he can make a success of Horizons, as well.

Lawton’s commitment to Horizons is hands-on from Monday to Friday and he plans to return to his family in Ipswich every weekend.

Lawton said he was aware of Horizons chequered past, however, believes he has the right formula to make it a viable concern. Lawton is determined to get, “spikes on the ground”. His plan is to meet the market, with his top end product.

“The main thing I have to do here, is to bring the prices back to what the people want, to make it a viable business, and let’s face it, for the last 18 years the people have spoken”.

Lawton has subsequently tailored a four prong attack, in tempting players back to this improving gem. He is currently offering 18 holes of social golf, inclusive of motor buggy use, for a mere $50.

A new Open Stableford competition, has been introduced for every Thursday, for a bargain price of $12.

The number of full playing members stands at around 200 presently, however, the new lessee is aiming to increase this figure to 800, by offering full membership, that includes unlimited golf, for $775, with a payment option of weekly or monthly direct debit.

For social clubs, a US Masters style jacket, valued at $295, will be provided to any Club who plays Horizons with a minimum attendance of 12 players.

Lawton is confident that he can break even in his first year, whilst returning the course into profitability, in subsequent years thereafter.

Lawton has already forged a friendly rapport with his Club members.

Members advised Pacific Golfer, that Lawton has done more for the course in the last 10 weeks, than all of the owners put together, since its inception. They also stated with a sense of relief, that it was great that they finally had a lessee, who knew how to properly operate the golf course.

One of the first challenges that Lawton faced, was to find a greens superintendent, in his pursuit to return the Salamander Bay course to its former glory.

Lawton was seeking a relative young person, on the way up, yet someone who had enough knowledge and experience for the role, whilst also possessing the eye of the tiger, with the hunger to put in the hours.

The new owner made several calls to people in the industry, and the name Matt Coles kept popping up. Coles was subsequently interviewed by Lawton, and although feeling nervous, with a sense of trepidation about accepting a role at Horizons, due to its chequered history, he knew within 20 minutes from the commencement of the interview, that Lawton had plenty of experience behind him, along with plenty of good ideas, in the future development of the course.

Coles has now gone the full circle, since leaving Port Stephens in 2002. After serving his apprenticeship at Nelson Bay, he spent 18 months in the US, working at Admirals Cove in Jupiter, Florida, then onto Westchester Country Club in Rye, in New York.

He then returned to Australia, to work at the New South Wales Club in Sydney, and most recently worked as the assistant superintendent at Newcastle Golf Club.

The condition of the course is improving at a rapid rate, whereby it is expected to return to absolute peak condition, within 12 months, with the nines being reversed, as part of the resurrection.

The 68 hectare course has been well designed, and its features include, 7.5 kms of cart paths, 96 bunkers, the tranquil wetlands, the native fauna and flora, the gated residential community, in the middle of the course, and the sense of playing golf, on a location that feels like being a million miles from care.

So there you go, be part of the Horizons comeback, as you will fall in love with the place, for the first time, or, if your returning to Horizons, your past romance with the course, is sure to be rekindled, all over again