St. Michaels Golf Club and the nearby driving range once operated by the late Dan Cullen are regarded as icons on the Sydney golf scene.

Yet they may have their relative tranquility shattered if plans to build $9m in apartments goes ahead between the course’s first fairway and the long-running driving range, where players like former US PGA champion Steve Elkington have honed their skills over the years. 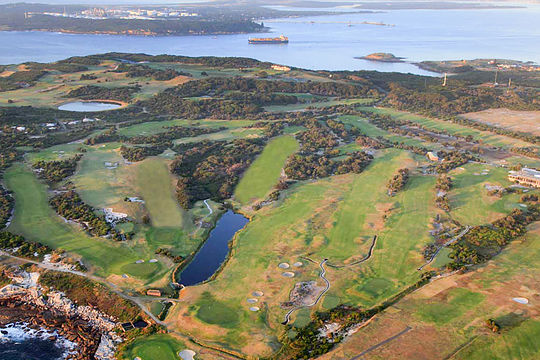 The proposal is for a two-storey, 34-apartment complex on what has been described as a tiny ‘sliver’ of private land at St Michael’s Golf Club in Little Bay.

Established in 1938, the St Michaels club is surrounded by Botany Bay National Parkland and boasts panoramic views of the Pacific Ocean and Little Bay peninsula from many of the holes on the course.

With about 1200 members, even big spenders like Greg Norman and the late Kerry Packer have had no joy with any proposals to alter the St Michaels layout.

But a residential development on the land next door could be another matter.

The surrounding land is zoned for public recreation but the private strip running through the centre of it was recently rezoned medium density residential.

According to one golfer who has played there for more years than he cares to admit, the driving range would probably have to go if the development did go ahead.

Jeff Wagner, a former touring professional who just happens to the general manager at St Michaels, says the only way forward as far as he was concerned would be to re-zone the area back to recreational.

Wagner said he felt it would be “impossible” for the development to co-exist with the golf club.

“The driving range would probably have to be shut down,” Wagner said.

“The whole thing would have to be netted to completely surround the building. The trees and scrub that thickly traverse the area would be cut down and cleared for cement.”

“The integrity of the golf course would be ruined.”