Behind the scenes at every PGA Tour event are an army of officials, maintenance staff and volunteers that are the lifeblood of every event, serving as scoreboard attendants, marshals, parking cars, working in hospitality – the list of roles to be filled are virtually endless. Without them, tournaments could not function as they do.

While this willing army of help are readily visible to patrons and spectators on site, there are others who work in the background hoping not to be called upon too often to fully exercise their responsibilities. 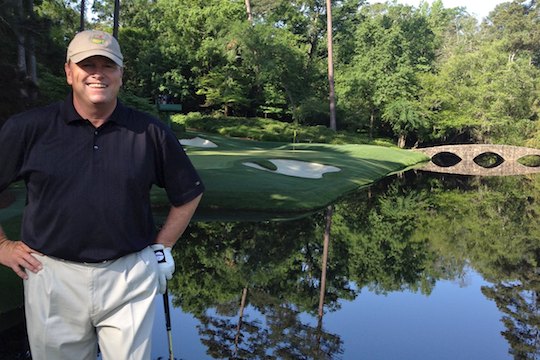 The PGA Tour’s Tournament Officials, or Rules Officials, are a vital cog in the machine, assisting in the course setup before the tournament begins, upholding the Rules of Golf and providing thankless advice to players on their options during the event – options that are sometimes not the most palatable.

Unbeknown to many golf fans in his homeland is the fact that an Australian has been plying his trade as a Tournament Official on the PGA Tour in relative anonymity for the past 14 years.

Steve Rintoul, a product of the sleepy fishing village of Mollymook on the south coast of NSW, is these days a veteran amongst a band of full-time officials on Tour.

Rintoul is fairly certain that he is the first Australian rules official to perform this role on a full-time basis in the United States, although other Australian-based officials such as Colin Phillips have done guest stints at Majors before him.

His pathway to his current role has been unique journey, certainly from an Australian’s perspective.

48-year-old Rintoul, who now lives in Tampa, Florida with his wife Jill and their three children, started in the game when his father was transferred as a school principal to Mollymook when he was 10 years old. The family built a home on a block of land above the 13th tee of the tough, tree-lined Mollymook Hilltop course.

Prior to the move, Rintoul did not play golf but with the course literally in his backyard, he took to it with typical boyhood enthusiasm and progressed quickly.

Rintoul’s representative career started when he made NSW Combined High School junior teams with players like Gary Barter, Brett Ogle and another young lad who would later prove to be a considerable influence on Rintoul’s direction in life: Steve Elkington.

The Wagga Wagga born Elkington was by then, living in Wollongong on the South Coast so Rintoul and he played a lot of golf together locally and in Sydney.

Elkington’s stature in Australian golf soared when he won the Doug Sanders Junior tournament and a scholarship to the University of Houston, the most powerful college golf program in the United States at the time.

Rintoul recalls that Elkington was among the first Australians to move to the US to play college golf and would later encourage him to consider coming to the US to do the same.

Rintoul was sold on the idea and after approaching a number of colleges himself, was eventually offered a place at the University of Oregon at Eugene.

“I had a great time there. It was on the West Coast so it wasn’t too hard to come back to Australia and we had good teams that competed nationally. My dad said, ‘Hey, if you don’t like it, you can always catch the next plane home’, so that made it pretty easy for me to deal with.”

One of the highlights of his golf career to this day was qualifying as an amateur for the 1988 US Open at The Country Club at Brookline, the year Curtis Strange defeated Nick Faldo in a playoff.

Rintoul turned pro soon after, playing the Australian and Asian Tours and then from 1990, spent 3 years on the Ben Hogan (now Nationwide) Tour before winning his card at Qualifying School for the PGA Tour at the end of 1993.

“I was getting married right near the Q School and I don’t remember doing much practice for it but went out and played great. Went there with no expectations and tore it up!”

Rintoul’s rookie year on the PGA Tour in 1994 would prove ultimately to be his most successful, playing 27 events with four top 25 finishes and the highlight of a 2nd place finish later in the year at the Buick Southern Open, ironically behind Steve Elkington.

This finish late in the season ensured that he would earn enough money to secure his card for the following year. At year’s end, Rintoul had earned $157,618 and to provide a current day perspective, Australian Marc Leishman played 27 tournaments in 2011, had 4 top 25 finishes including a 3rd place and earned $916,330.

Rintoul battled away for a number of years, admitting to never feeling quite comfortable in his own skin on Tour before eventually making the decision in 1997 to step away after 181 appearances on the Hogan and PGA Tours.

“I was in an era where I played practice rounds with guys like ‘Elky’ and every now and then, (Greg) Norman would play or ‘Finchy’ (Ian Baker-Finch), ‘Grades’ (Wayne Grady).”

“I’d always felt maybe I’d overachieved to get to the Tour, overachieved to stay there. You play practice rounds with these guys and it’s like, holy shit, this is great experience but you get a bit of a complex playing with guys who are hitting it right in the middle of the club every time.”

“I never thought I was good enough to have a long career on Tour. Seeing how good they all were, I didn’t really have the drive to do as much work to be as good as them.”

Ironically a rules infraction of his own in 1995 at the Bell South Classic in Atlanta, when disqualified for dropping a ball instead of placing it when taking relief from an area of Ground Under Repair, really sparked his interest in the Rules of Golf.

Rintoul said he wondered at the time what else he didn’t know about the rules and was shocked to discover it was a considerable amount.

“When I lost my card in 1997, that’s when I started thinking about the Rules and the administration side of the game. I don’t know why I was interested, I just was. Playing golf wasn’t the be all and end all for me so when the opportunity came up, I jumped at it.”

“I wasn’t one of those guys that wanted to keep beating my head against the wall year after year trying to keep my card.”

Playing By The Rules

Rintoul was hired by the Tour in 1998 and worked on the now Nationwide Tour before stepping up to the PGA Tour in 2001. There is a lot to be said for hiring a former player who knows firsthand what players are going through and thinking under tournament conditions. The Tour had a number of Officials moving on at that time and wanted to get some younger guys in. Rintoul fitted the bill, coupled with the fact that he was a recent Tour Player so the timing was perfect for both parties.

In his time on the Hogan Tour, Rintoul competed regularly with names like Jim Furyk, David Duval, Paul Goydos and Chris DiMarco as they were establishing their high profile careers, but was now faced with the prospect of having to potentially call rules infractions on them and other former peers.

“I think there was naturally some scepticism early on about how much did I know, but over the years, the mutual respect has grown. When it comes down to it, the rules are the rules, but fortunately I’ve never had an incident where it’s been uncomfortable when I’ve had to apply a penalty.”

In 14 years tagging along behind the greatest players in the game, Rintoul has obviously witnessed more than his fair share of great golf and golf shots. Do any particular shots or situations stand out for him? As you would expect, The Masters provides a number of the examples but Rintoul spoke immediately about a recent shot he ‘didn’t’ see as being one of the most memorable.

“The roar that I heard when Louis Oosthuizen holed that second shot on the 2nd at The Masters this year was incredible. I was working on the 16th green on Sunday, which is probably about 400 yards away as the crow flies, but the roar when he holed it and the prolonged roar as he walked all the way to the green was one of the ‘sounds’ of golf that I’ll never forget,” he said.

“When Tiger pitched in on 16 from behind the green in 2005, that was a similar situation. I was behind the 15th hole that Sunday and had a perfect view of the whole thing. You see so many great shots every day but those two at that particular tournament stand out.”

Rintoul works in a group of about 16 full-time Tournament Officials on the Tour who he rates as a very cohesive team who possess a mountain of Rules experience, as you’d expect.

All of his colleagues enjoy the opportunity to play some golf when on the road however Rintoul for the most part has very happily ‘retired’ his clubs to the garage when he travels for work.

“Travelling with my clubs, getting them in and out of airports, is something I have enjoyed ‘not’ doing after playing professionally. I don’t often take them with me when I’m working.”

“Every now and then, we are very grateful for the opportunity to play at some great golf courses like Pine Valley and this year at Augusta National the day after The Masters. It’s like when we were kids, getting to play a Royal Melbourne or a Royal Sydney, places that are something special.”

Living in Tampa and working up to 30 weeks on Tour per year, Rintoul doesn’t get back to Australia as much as he’d like but was back with his family at the end of 2011, working at the Australian Open before the Presidents Cup at Royal Melbourne.

Rintoul is not working at the US Open in San Francisco this year but will be heading over to England for the Open Championship at Royal Lytham & St Annes in July.

You could say that things have turned out okay for the boy from Mollymook.