Ah yes, the putter – easily the most maligned club in the golf bag. The club that has been discarded by more golfers than any others.

Even famous golfing firebrand Tommy Bolt once made his putter pay for a poor round: Bolt famously tied his under-performing club to the back of his car and dragged it all the way home along the road to make it pay for letting him down on the course one day. 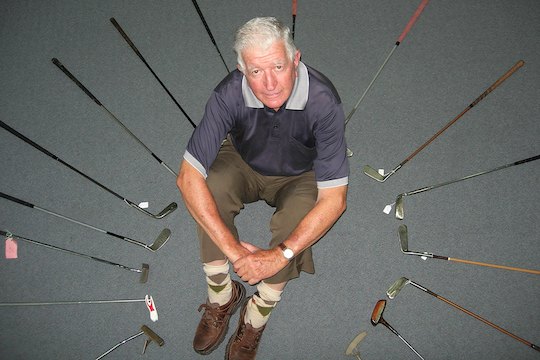 Others have become lifelong partners with their partners, refusing to part with – under any circumstances.

I have a mate with one of those old centre-shafted putters – not unlike the one Corey Pavin still uses.

His putter is covered in rust and looks likely to collapse at any moment – although it is held together by reams of old masking tape.

The ball jumps off the putter face and usually bounces part of the journey to the hole, every time.

But he loves this old putter and refuses to part with it – and I guarantee he holes at least one 20 to 30 footer in every round – just so he can wave it at us and tell us there is plenty of life left in “this old dog” yet.

Others, like two-time major champion David Graham, have a garage full of putters and he might have been the one to suggest there was only so many ‘holed putts’ in each putter and once they have fulfilled their quota, well, they are relegated to the garage, again, only to be reborn when another horror round of putting means looking for something new (or old) to add to the golf bag.

Your average golfer goes through between three and six putters in a lifetime.

And that makes a recent donation of a large number of putters to the Australian Golf Heritage Society Museum at Granville that much more extraordinary.

The museum in Sydney’s western suburbs can now almost certainly boast the largest collection of putters in Australia.

“There are literally hundreds of them”, museum manager Tom Moore told The Golfer Pacific.

“We have them in all shapes and sizes – from the now-banned ‘croquet’ style putter to a variety of zany shapes, including one shaped like a sausage on a fork.”

The highlight of the collection is undoubtedly a replica of the great South African champion Bobby Locke’s putter, which he used from 1952 to 1968.

In 1988 this club was voted ‘Putter of the Century’ during the commemoration of the first 100 years of golf in the United States.

The replica was donated by Des Froneman, who possesses the original.

These days the range of putters is limitless; however this was not always the case.

In the hickory-shaft era, styles were quite restricted, and the centre shaft putter was banned by the R & A for many years.

With the development of the steel shaft, the range of designs and materials used exploded.

A number of these putters will form part of an exhibition at the museum recording “100 Years of Professional Golf in Australia” to coincide with the formation of the PGA in 1911.

And for those who have missed it, the museum is located above Golf Mart at 4 Parramatta Rd, Granville and is open every Sunday from 10am-4pm or by appointment.

Maybe you have an old putter you are looking to donate?